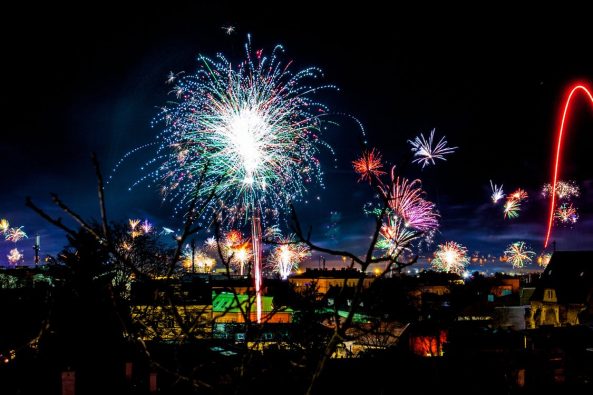 Chinese New Year has enjoyed a history of about 3,500 years. Its exact beginning is not recorded. Some people believe that Chinese New Year originated in the Shang Dynasty (1600–1046 BC), when people held sacrificial ceremonies in honour of gods and ancestors at the beginning or the end of each year.

Like all traditional festivals in China, Chinese New Year is steeped with stories and myths. One of the most popular is about the mythical beast Nian, who ate livestock, crops, and even people on the eve of a new year. (It’s interesting that Nian, the ‘yearly beast’, sounds the same as Nian ‘year’ in Chinese.). To prevent Nian from attacking people and causing destruction, people put food at their doors for Nian. In the story it is said that a wise old man figured out that Nian was scared of loud noises and the colour red. So, then people put red lanterns and red scrolls on their windows and doors to stop Nian from coming inside. Crackling bamboo (later replaced by firecrackers) was lit to scare Nian away.

The Chinese New Year, also known as the Spring Festival will last for seven days. The festival will be celebrated by a quarter of the global population, as it is celebrated by people in China (including Hong Kong, Macau and Taiwan), Indonesia, Philippines, Vietnam, South Korea, Malaysia, North Korea, Brunei and Singapore. Just like in the West the New Year celebration is about getting together with family, looking back at the year past as well as planning for the next.

Many Chinese who had flocked to the major cities for work will return to their hometowns. This movement of people has been annually cited in media reports as the largest migration on earth, roughly 4% of the global population. After the crowds of people have left the cities, the streets of places like Beijing and Shanghai fall silent. The banks, schools and all the small eateries, bars and tea houses will be closed.

In the days preceding the new year the house / apartment will be cleaned and New Year shopping will be done. Many people will hang lanterns or couplets on their doors. Families will gather to celebrate by eating, drinking and watching CCTV1’s New Year’s Gala show, which is a bit like a cross over of the ‘Queens Speech’ and ‘The Royal Variety Performance’. Children will receive ‘hongbao’ (Red Pockets), red envelopes containing money.  Before the celebrations are over mahjong will appear. On the Chinese New Year’s Day many people will let off firecrackers as well as offering sacrifices to the ancestors. Soon the phones will come out and billions of WeChat messages will be sent offering New Year greetings and e-red pockets.

Certain dishes are eaten during the Chinese New Year for their symbolic meaning and the belief eating them will bring good luck for the coming year. The most common Chinese New Year foods includes dumplings, fish, spring rolls, and niangao.

Firecrackers (noise makers) and Fireworks are a big part of Chinese celebrations. Unfortunately, due to noise and air pollution fireworks have been banned in many big cities. The ban has had the added benefit of less apartment fires!

The fifteenth day of the New Year is the Lantern Festival. It is the traditional end of the Spring Festival celebrations. People send aloft glowing lanterns into the sky (another way to risk starting apartment fires) while others let floating lanterns go on the sea, on rivers, or set them adrift in lakes.