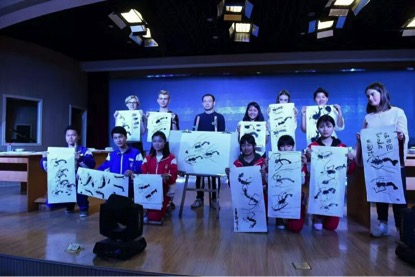 The following is the ‘Information Sheet’ by Grace Kim, one of the students who went to Nanchang on the annual student exchange to China arranged by  New Zealand China Friendship Society (Tauranga):

“During our visit in Nanchang, China, we met and were welcomed by many different people in various situations and places.  Even though there was often a clear language barrier with some of the Chinese people not being able to speak English and our group not being able to speak Chinese, we were all still able to have a highly enjoyable and great time with such friendly people. The people that we were to stay and interact with the most were our host families. In my host family, there was my e-pal whose Chinese name is Jiang Qin Yi and whose English name is Josie.  Josie was 2 years younger than me and was highly proficient in speaking English which made conversations between us easier.  I had only started talking to her a week and a half before the trip [by skype] due to my original e-pal pulling out of the programme for family reasons.  Even so, Josie and I got along very well.  The two of us had a lot in common and enjoyed each other’s company thoroughly throughout my stay in Nanchang.  She was a bright and bubbly person who always liked to laugh and joke. Josie has an older brother who was studying in university.  I only met him twice but he was just as friendly and kind as Josie was.  My e-pal’s mother was a doctor and her father was an engineer. Even though the both of them were very busy with their jobs taking on both day and night shifts, they always made the time to take me around Nanchang so that I would have the best time exploring all the different aspects that the city had to offer.  Two other people in Josie’s family who were also of large significance during my stay in Nanchang were Josie’s grandparents. 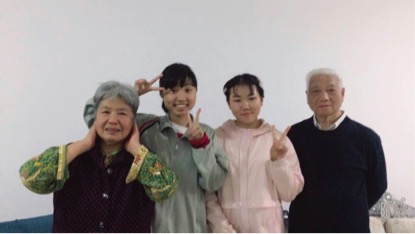 “Nearly every night, our family would head over to their mother’s parents house to have dinner.  Josie’s grandmother was a wonderful cook and though we could not communicate in the same language, smiles and short words of thanks were enough for the both of us.  Her grandfather was usually quiet during our visits but never failed to offer me fruit after dinner or let me sit comfortably next to him on their living room sofa whilst watching the television.  Every member of their family made me feel like I truly was welcomed, doing the most for me even when I had not asked them to do so.  Their compassionate and humbled spirits are something that I will treasure for my lifetime.  Although I only spent 2 and a half weeks with them, I truly felt like that I had found another family.

“As the exchange to Nanchang was based on the fact that we would be sharing aspects of New Zealand art with Chinese people, we found ourselves meeting and interacting with many Chinese students. We went to various schools including the new campus of Nanchang Foreign language school, Jiujiang No 5 Middle School , Jiujiang No 7 Middle School and the old campus of Nanchang Foreign Language School (NCFLS).  At all these schools, we were taken care of extremely well and welcomed with open arms.  Many of the students were curious of the foreigners visiting their schools, especially of Tanner and Emily who both had blond hair.  Funnily enough, I was mistaken to be Chinese multiple times but it was highly understandable because of my Korean ethnicity.  At both the old and new campuses of Nanchang Foreign Language School all of the students were as highly proficient in English as our e-pals were which made for easy communication and conversations.  At the Jiujiang No 5 Middle School Art School, our group was paired up with random students for painting and eating dinner.  As the school wasn’t as English focused as NCFLS, there was a struggle to communicate with them as easily as we did with the other students we had met at NCFLS.  Even so, it was amusing when I used an electronic translator that my partner had so we could talk.  Though we could not speak verbally in the same language, it was charming to see her efforts in trying to communicate with me.  That afternoon which we spent at this art school, I truly realised that a common language was not everything to becoming friends or closer with someone because I was able to have such an enjoyable time even without speaking to her in fluent English or Chinese.

“At times, the attention given to us by the students in China was overwhelming due to the size of their student bodies.  But none the less, it certainly was a memorable and cherished experience.  At all the schools we also met various members of staff and teachers who toured us around the area and gave us a better understanding of the schooling system in China.  We learned many great things from them and were very grateful for their hospitality.  Some teachers were with us throughout the whole trip, making sure that we had settled in well, had eaten enough food and weren’t overly exhausted from our busy daily schedules.  Overall, the group and I were not expecting that the people we met in Nanchang would be as amiable and cordial as they were. Their generosity surpassed any expectations that we could have had and we found it difficult to say in both words or actions just how deeply thankful we were for their support.

The trip was truly made due to their helpfulness and we truly couldn’t ask for anymore than what was given to us so graciously. I can only hope that we will be able to treat our e-pals with just as much warmth and care when they come to do their exchange in Tauranga later this year.”

From the “Information Sheets” Series written by students after the annual student exchange to China arranged by  New Zealand China Friendship Society (Tauranga). This year the eighteen-day exchange happened in April.  It was partially funded by the Simon Deng Li Fund. 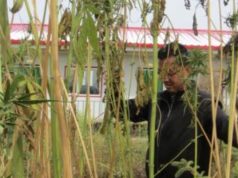