The following is an article published by South China Morning Post ( 1 September, 2017) under the title ‘Learning from China: three lessons for the ignorant West‘.

Dave Bromwich (NZCFS National President) says: “It captures some truths which need to be understood. It is all about perspectives”.

Diego Gilardoni says after years of ignorance, the Western political and business elite need to understand that some Chinese cultural traits – such as longer-term, holistic thinking – can help open new frontiers and opportunities.

There is only one thing more staggering than China’s mind-blowing economic metamorphosis in the past few decades. It is the still widespread ignorance about China among Western political and business elites. We live in a multipolar and complex world, in which China is becoming an indispensable player, but too many still think through a Western-centric and simplistic mental framework that is still rooted in the 20th century and therefore does not meet today’s challenges.

China’s increasing clout on the global stage is met with a combination of fascination, awe, concern and sometimes outright fear, and rare are those who make a serious effort to understand China and try to see the world through its cultural prism. This is a serious mistake, because understanding Chinese culture has become indispensable for anyone interested in making sense of a hyper-complex world where China plays an increasingly crucial role.

Why the world has to study Chinese history, and how China views history

Learning about Chinese cultural values is not just paramount to understanding the reasons behind China’s behaviour; the West could actually learn a great deal from China, whose system of thinking is, at least to some extent, better prepared to tackle the challenges of our “age of complexity”. 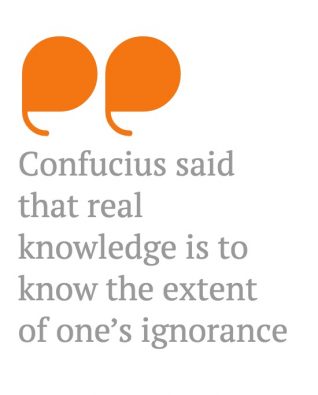 For example, while in the West a short-termist mentality prevails that is the root of both economic and political ills (from the financial crisis of 2008 to the transformation of democracies into inefficient “vetocracies”), Chinese culture is oriented to the longer term. Holding a long-term perspective allows you to have a clearer perspective on things, therefore reducing the risk of rushing into decisions without considering the wider context.

The long-term orientation of China is reinforced by the Daoist principle, according to which the only unchanging law of the universe is constant change. For the Chinese, things will always change and what is bad today could turn out to be good, just as much as a loss could turn out to be a gain in the future. This is why in China it’s always the context that matters.

The five main projects of the Belt and Road Initiative: A visual explainer

All of this plays out in the global success of many Chinese companies that are able to integrate in a pragmatic way their short-term objectives into a long-term strategy. But maybe the best example of Chinese long-term orientation is the Belt and Road Initiative, China’s vision for a new Silk Road that, if successful, is set to reshape global trade in the coming decades. An economic and geostrategic project of such historical proportions could not have been devised by a Western government used to focusing more on the next elections than on the next generations.

A second aspect of China’s culture that differentiates it radically from the West is the way the Western mind focuses on things while the Chinese mind focuses on relations between things. In the Western tradition, we are used to thinking analytically: in order to make sense of the whole, we need first to analyse the parts separately. The Chinese way is completely different. The Chinese think holistically, meaning they don’t separate the parts from the whole, because the whole is not made of the combination of the parts but of the relations between them.

This difference in thinking patterns is reflected very clearly in the difference between Western and Chinese medicine. The latter treats a disease by regulating the whole body and not just a single part of it, because any problem in a specific part of the body is considered to be a local reflection of imbalance of the whole body.

Medicine aside, this approach can be very useful in trying to make sense of the complexity of our world, where all the global issues of our era (whether economic, social, cultural, military or natural) are interconnected and can’t therefore be analysed independently from each other without running the risk of missing an important part of the “big picture”.

Unfortunately in the West, many political and business leaders are facing the challenges of the future with an intellectual toolbox of the past

Another central characteristic of Chinese culture is the synthetic integration of opposites and contradictions. In China, as the saying goes, if a statement is true, its opposite can also be true. This makes no sense to the binary logic of Western thought, based on the principle of non-contradiction, according to which if A is true and B is the opposite of A, then B must inevitably be false. It does not work this way for the Chinese, who are influenced by the Daoist principle of “yin and yang” that says that all things are inseparable from their opposites; both A and B, despite being opposites, can be true.

While Westerners see two (apparently) opposite concepts as irreconcilable, the Chinese see them both as part of something bigger and therefore can synthesise them into a new concept. The best example of this mental pattern comes from the Chinese language itself, where the word for “crisis” is the combination of the words “danger” and “opportunity”. By being comfortable with ambiguity, the Chinese can therefore merge two opposite perspectives and create a new one.

Science or divination? How an ancient system of Chinese thought may hold answers in our age of uncertainty

We can see this cultural attribute playing out in some political concepts developed in the past few decades, such as “one country, two systems” and the “socialist market economy”. For many Westerners, these concepts would be considered nothing less than illogical oxymorons, but for the Chinese they simply reflect a holistic and dialectic integration of opposites that open the way to a new and original perspective on things; a perspective that is not based on an abstract and dogmatic analysis of reality but on pragmatic adaptation to a specific context. The Chinese don’t think in terms of “or” but rather “and”: not “state or market” but “state and market”, not “competition or cooperation” but “competition and cooperation”.

In the West, most politicians still think dogmatically in terms of irreconcilable opposites; they are incapable of developing a new perspective on reality and this is why they are losing ground.

In the past 15 years, the world has changed dramatically and the changes to come (as a result of shifts in the geo-economic balance and the advent of disruptive technologies) will require the right mental framework from global business and political leaders. Unfortunately in the West, many political and business leaders are facing the challenges of the future with an intellectual toolbox of the past.

China’s road or the Western way: whose economic development model will prevail?

To be a global leader today, one needs to develop a global mindset. Developing a global mindset means combining different perspectives and, through a creative synthesis, integrating them into a new one. A new perspective can help us untangle the complexity of our world and find new solutions to new problems. Western leaders need to understand that learning from Chinese culture can only be beneficial and open up new frontiers and opportunities.

Confucius said that real knowledge is to know the extent of one’s ignorance. It is time for Western political and business leaders to acknowledge their own ignorance and do something about it.