Tibetan Issues, presented to the delegation invited by Department of External Security Affairs, Ministry of Foreign Affairs. This report provides detail of the activity outlines in “Trip to Gansu Province and Xinjiang Autonomous Region, July 7 to 14” in July newsletter.

There are a further150, 000 Tibetans in India, and 30,000 in Nepal. The government policy on those living outside China is clear. If they accept that Tibet is an integral part of China they are welcome to return. The CCP has held discussions with the Dalai Llama’s representatives on ten occasions, but the Dalai Llama has not agreed to this position. Then, Tibetans are free to stay away. Their culture has weakened in their exile, and they now play little part in Tibetan affairs. We were informed that since 1959 the Dalai Lama has received funding from the USA.

On July 8, in Beijing, the delegation participated in a seminar at China Tibetology Centre.

The biggest problems for economic development in the Tibet Autonomous Region (TAR) and Tibetan autonomous prefectures were identified as high altitude, cold, little rainfall with poor quality grasslands, and the relative isolation of the whole region, all providing limited conditions. Poverty alleviation campaigns are focusing on three regions with the poorest conditions.

Major achievements include the rail line, and an increasing network of good roads. This has seen an increase in car ownership, with 40% of all households owning a car. Herdsmen have a preference for SUVs, while Lhasa now averages one car per household.

Cars solve the problem of poor access to education and health care that was predominant under the nomadic way of life. Now, there are an increasing number of Tibetans living in permanent settlement areas near cities, with traditional herding livelihoods retained. Herdsmen take their stock to summer pasture lands, and return to permanent settlements in winter, with mobility between the two through their SUVs. Nomadic life with modern characteristics!

The government has placed a strong emphasis on ecological protection on the Qinghai-Tibetan plateau, with glaciers in rapid retreat, and lake levels rising. To date, 34%of the area is preserved as ecological reserves employing large numbers of Tibetans. There is a balance between economic development and ecological protection with ecology have in priority. 66,000 Tibetans hold jobs in ecology protection, at an average of 3500 yuan per month.

Twelve trillion yuan has been provided to the Tibet Autonomous Region (TAR), comprising 85% of GDP. Each province in China should give 0.1% of its GDP to support the TAR.

The delegation then visited the museum at the Tibetology Centre, which presented a historical account of migration onto the plateau, the relationships with the dynastic rule from the various capitals, and the culture.

Next day the delegation flew to Lanzhou, and met with the Gansu Academy of Social Sciences. The focus of this visit was to learn about implementation of the approach to poverty alleviation in Gannan Tibetan autonomous region, in the south east of Gansu province, bordering Sichuan and Qinghai. The land here is on the North-east corner of the Qinghai-Tibet plateau, and has elevations on average over 3000 metres above sea level.

A very high level of support is given to increasing standards of living, and reducing poverty, while retaining culture. Statistics show a reduction in poverty of 90% since 2013. There are 146 bilingual schools, where 900 ‘daily expressions’ in Mandarin are compulsory to provide an understanding of Chinese systems. Tibetan language now has a computer input available, and Tibetan courses are provided at University level. Education is free for 15 years, and health care for elderly is free. Tibetan ‘tangible culture’ is promoted, with Tibetan traditional medicine given as an important heritage to retain and promote. There is integration between Tibetan medicine and health care provision.

While Tibetans make up the majority of the population, there are a total of 24 ethnic groups there, with Han, Tu, Hui being the other major groups. Interaction and unity is encouraged.

Our bus exited the traffic of Lanzhou city around 9 am, and for several hours we travelled the motorway through Linxia Autonomous Hui Prefecture. Very prominent on this journey was the very high density of mosques, domes resplendent in shades of gold, blue and green, each mosque with one to five minarets piercing the landscape. At times we could see up to eight mosques at any one time out the window, spaced within 500 metres of each other. Gansu province has around 1.35 million Muslims, and 2500 mosques.

Quite suddenly the bus started to climb. At around 2200 masl mosques changed to Buddhist temples and stupas, predominantly in white and gold. We visited the famous Labrang monastery in Xiahe to see working Tibetan Buddhist monastery. Tourism is rather dominant in the society of the monastery, but as an example of the freedom for Tibetan Buddhism it works well.

Overnight in the Gannan capital of Hezuo. Hezuo is over 3000 metres above sea level. I passed through here in 1991 while travelling with my family. It has transformed from a sleepy Tibetan town on the border of Sichuan, almost with Yaks tied to hitching posts, to a bustling modern city. Glad I passed through in 1991! 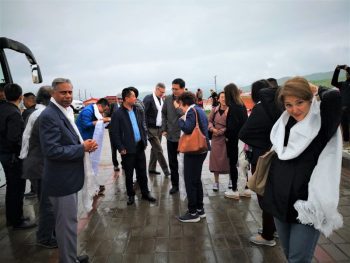 Next day we visited the model village of Gaozai. This is among the first five of a planned 24 large scale such villages to be developed in Gannan by the end of 2020 as part of the Chinese government programme to completely remove poverty.

Tibetan households were given money to build houses, but labour had to come from themselves. This is a village of just over 1000 inhabitants. All spoken to seemed very content to enjoy permanent dwellings, and to no longer spend the long winter months in felt tents of Yak wool.

Strong environmental policies are instituted to re-establish forests, and reduce desertification of the grasslands. Two key industries have been developed. Agriculture includes planting of vegetables, fruit and medicine plants, while traditional animal husbandry has got a boost, with the nomadic lifestyle still practiced when the herdsmen take their animals, mainly Yak, sheep and a few horses, to the more remote summer pastures, but with homes to return to. A yak milk powder industry has been developed.

Secondly, in this village, tourism is being developed, with options for tourists to experience local culture, food, even spend a night in tents, with horse riding and trying a hand at handcraft. Some households have built guesthouses, with small restaurants, and bars for evening entertainment.

We sat in a cosy living room in one of the homes for discussions, and were treated to local snacks, and a sample of the butter tea with roasted barley meal stirred in. Not at all bad really! We learnt that a ‘village collective economy’ system ensures equal access to the benefits of the key industries. Leaders are elected by the community.

We returned to Lanzhou. For some time the road wound its way over passes up to 4400 masl, with yak and sheep grazing the high grasslands. Then back down through the valley of Linxia Hui Autonomous Prefecture, resplendent with its colourful minarets, to Lanzhou. 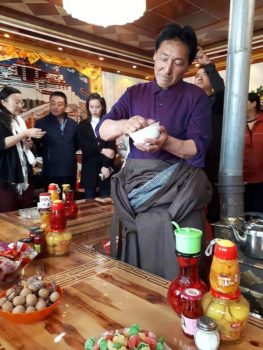 With the discussions in Beijing, Lanzhou, and our visit to Gannan Tibetan Autonomous prefecture, we could see that the changes being brought to areas on the Qinghai-Tibetan plateau were making progress with poverty reduction and environmental protection in this fragile region. While bringing some changes to traditional ways of life, it was also facilitating retention of traditions. The Tibetans as beneficiaries appeared to welcome the progress made in improving their standards of living.