Xinjiang Uyghur Autonomous Region (XUAR) is a vast area in the North West of China, taking up 17% of the total land area of China. However, only 10% of this is inhabitable because of the large Taklamakan desert, and the Tian Shan, Karakoram and Kunlun mountain ranges in the border areas. Xinjiang borders Tibet, Qinghai and Gansu within China, and has borders with India, Pakistan, Afghanistan, Tajikistan, Kyrgyzstan, Kazakhstan, Russian and Mongolia. The population is about 25 million, 46% of whom are Uyghur, 38% Han, and a large number of other minority groups. Both Uyghur and Mandarin are official languages. 58% of the total population are Muslims.

Beijing: The delegation participated in a forum at Institute of China Borderlands, China Academy of Social Sciences, with a focus on Xinjiang issues.

Xinjiang has a very prominent part to play in the Old Silk Road, and today is prominent in the Belt and Road Initiative (BRI), that is providing some major infrastructural and economic development opportunities for the Region, and opening the cities on the western border to the outside.

The forum discussed security issues. Xinjiang faces three issues: that of radicalisation, terrorism, and separatist activity. Resolute policies have been implemented to counter these.

Radicalisation has come from both internal and external influences, and affects both security in Xinjiang and China, as well as other countries where terrorists trained in Xinjiang have gone. China has taken several approaches: to reduce radicalisation and eliminate terrorist activity. This inevitably restricts those who are committed to carry out terrorist activity, and those promoting and delivering training to disenchanted young men. On the other hand this protects the safety of the vast majority of the population, respecting and enhancing their human right to live in a secure and peaceful society.

It is recognised that poverty has a part to play in misdirection, especially of young men, towards antisocial behaviour that may attract people to terrorism, and that encourages extreme religious beliefs. The whole of society has responsibility to counter terrorism, while county and township governments are at the forefront. They work in village communities to encourage adherence to true religious beliefs not distorted by extremist ideology and work together to introduce legal rights and responsibilities.

The Chinese approach to counter terrorism has two approaches. One is to deny convicted and would be terrorists of their freedoms to protect the safety of the vast majority of the people of Xinjiang. The second is to improve the living conditions and work opportunities of all. Vocational training schools have been established all over Xinjiang to facilitate a ‘de-extremisation’ approach. These are designed to offer an alternative to punishment or prison for those who have committed minor offences, like petty theft or failing to send their children to school.

The compulsory study of language, and Chinese law are complemented by a choice of vocational subjects. Language provides the means, law allows determination of right from wrong, vocational classes provide for future employment. 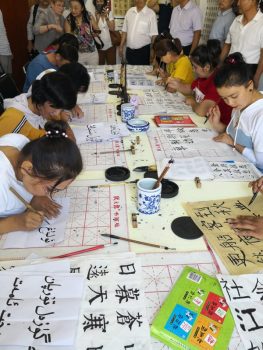 We visited a vocational training school in Turpan. There are 600 offenders studying there, mostly from the countryside. They are given the choice of receiving punishment, or attending a vocational school. Two subjects are compulsory: language classes in both Uygur and Chinese, and Chinese law. We saw a very interactive and fun mock-court class on legal rights where teams competed to display their best judgement of permissible actions. These are intended to better prepare for a life integrated with mainstream society, within the law. They then choose vocational classes. We visited classrooms teaching dressmaking, tour guiding, cultural performance, make-up, homecare skills. There is an 80% success rate in graduates finding jobs, or becoming self-emloyed

There was comment on the way the Western press prefers to present these activities. Restriction to religious freedom, internment camps, and denial of human rights are very common. My fellow delegate, S.M Hali, a Pakistani journalist, a practicing Muslim, and a visitor to Xinjiang since 1974, perhaps provides the most credible response to religious freedoms. He specifically carried out a research trip that included Xinjiang, and Ningxia Hui Autonomous Region (Hui are the major Muslim group in China) in 2017 and found that there is no restriction on the practice of Islam. He has visited the main Training School for Imams, where a liberal form of Islam trains the imams who are then consigned to the numerous mosques in Xinjiang and China. Later we visited a mosque in Urumqi where one of the graduate imams introduced us to the extent of religious practice and activity in his mosque.

Vocational Training schools are reported as internment camps to the west, thus achieving high numbers of ‘interns’ in their reporting. There is no reporting of the purpose or successful outcomes from these instituions. The concept of achieving a positive livelihood as a human right does not fit well with the negative rhetoric desired in western reports.

We visited the remarkable Karez system of irrigation that brings water in an extensive network reaching thousands of kilometres of manmade underground channels from the mountainsto the agriculture. Turpan has the status of being the third lowest region on earth, at 154 metres below sea level, and the area is famous for its grapes and melons.

At 9.00pm we set off for a visit to Jiaohe, the ancient town that served the Silk Road through various rulers from 108 BC through to the Mongol dynasty. Largely a Buddhist society it is now a UNESCO heritage site. In Xinjiang it does not get dark in summer until after 10.30pm, and it is cooler at this time of night.

In Urumqi, after a 40 minute bullet train journey, we visited the ‘Exhibition on Major Incidents of Violence and Terror in Xinjiang Uyghur Autonomous Region’.

This very demanding and traumatising exhibition presents 40 incidents of terrorist attacks from 1998 to 2015. It includes displays of weaponry and home made bombs. Very graphic photos show victims of bombings, and hacking by axe and machete. Some bodies shown have been executed by beheading, or by bullet. Victims often include children, as attacks occur in public places, and is indiscriminate in who is attacked, including Uygur people. Some of the incidents are actually captured on video, and many of them present evidence that link the attacks directly to directions from named terrorists outside China. There is a very disturbing video captured that provides training on how to make weapons, deliver attacks, and carry out executions, including a graphic depiction of a beheading.

Hali makes it very clear that Islam and terrorism are not the same. A terrorist cannot be considered a Muslim as this is against the teaching in the Koran. It is an incorrect interpretation.

Terrorism is presented as an external issue that has come into Xinjiang from the terrorist trouble spots to the west, specifically from the Islamic State. It has further become a training ground for terrorists to travel to other areas. The Kunming Railway station bombing of 2014 is considered a response to a small group of terrorists being thwarted in their attempt to cross the SW China border to travel to SE Asia.

Terrorism is considered a global problem, and all nations need to collaborate to remove this threat. Rather than misrepresenting China as committing human rights abuse, genocide and loss of freedom of religion, the contribution of China to eradicating terrorism should be praised. The 2015 attack that killed 139 people and injured over 1700 has been reported as a Uygur uprising in the west. This kind of reporting appears to support the use of terror, while condemning the approach to eradicate terrorism. Xinjiang has now been free of terrorist activity for over three years. The levels of security are starting to reduce, and a safe society is being re-established.

Recently 22 countries signed a letter to the UN condemning China for its human rights abuses in Xinjiang. This was quickly followed by a letter from 37 countries supporting China’s approach to eliminate terrorism for the good of its citizens. Looking at the nations that gave support, they are largely Muslim countries, neighbours and poorer countries. Perhaps their understanding of the contribution of creating safer societies carries a higher degree of validity.

I have reported the visits and findings that were presented to the delegation as accurately as possible. At minimum a balance to reports in western media, and in particular the negative rhetoric, is required. But more so, the misrepresentation of the truth is unhelpful in understanding the role China has in contributing to global counter-terrorist effort, and the attack on human rights of the vast majority of the people in Xinjiang, needs to be countered.

Links to some alternative reports on closely related topics from the time of the visit can be found here:

For ongoing reports with a Chinese perspective: