Zhangye, the nearest large city to Shandan, is located one hour/65km to the NW of Shandan.   It has a population of about 1 million.

It is the city where Marco Polo is reputed to have spent a year.  There is a statue of him as a very young-looking european man.   Famous tourist sites include the Zhangye Dafosi or Large Buddha – this Buddha is reclined whereas with the Shandan one which is seated – the legend saying he got more tired as he walked up the Hexi corridor.  Danxia, the coloured mountains are internationally renown, and can be visited by public bus from Zhangye.   There are many other attractions in this city, they are sufficiently documented in various websites – Zhangye is on the ‘tourist trail’, so more information is available than for Shandan.

Local bus #22 goes goes from the South bus station to the Fast Train station.
Local bus #1 goes to the older train station, and will take over 15 minutes.  Cost was 1.5Y(RMB) in 2015.  It is a yellow bus, not a green one.  [Most local buses charge 1Y, so if you are charged 1.5Y, you know you are on the correct bus!]  The bus route runs through the centre of town, then past the East Bus Station, before heading out to the railway station, which is the end of the line.

Around town there are many local buses, costing 1-3Y per trip.   Taxis are plentiful and cheap.

Taxis are plentiful and very cheap, maybe 5-15yuan (1-3 dollars NZ) for any trip within the city, to railways station, etc. And you do not need to find a bus stop, and determine if it is going in the correct direction to desired destination, when to get off, etc.

As for travel between Zhangye and Shandan and Zhangye, taking a train is not the best solution. The bus  (currently about 15 yuan)  takes about one hour, leaves every 20 to 30 minutes from East Bus station, right in town , drops you  in Shandan rather than again having to get a taxi or bus from Shandan Railway station.

For bus trips leaving Zhangye, there are three main bus stations – in the South, the East, and the North, their locations are detailed below: 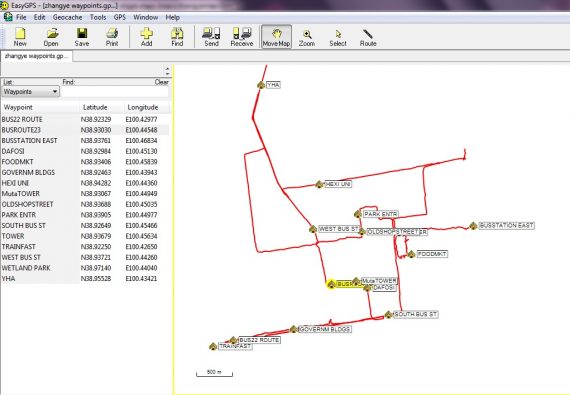 Buses to Shandan leave from the east bus station.  It’s location is N38.93761  E100.46834.  It is on the right of the road as you face out of town, down a long drive/road beside a wetland full of rushes, with a hospital building on the other side.   You don’t need to enter the bus station to catch the bus – entering involves X-rays, security…  Most people wait on the drive for the bus to emerge and then get on.  Buses go when full, usually every 15 minutes or so.  The bus will have a sign in the front window with it’s destination – look for one saying Shandan (in Chinese). Tickets are purchased on the bus.  The last bus for Shandan leaves between 5-6pm.

Added bonus of travelling by bus – the stretch of road from Shandan to Zhangye is quite good for Great Wall views – long stretches of wall, only broken in places, some watchtowers, and close to the current road.

Zhangye can be visited year-round.  It will be very cold in winter, but is usually sunny and still, so relatively pleasant; temperatures drop to -25C.   Springtime it becomes much windier, and dust storms are possible.  Summer is hot and pleasant, with temperature reaching 30-35C.
Current weather can be viewed on http://www.accuweather.com/en/cn/

As in all of China, it is preferable to avoid the peak holiday weeks of Golden Week (1-7th October), Spring Festival/Chinese New Year (10days in January or February, exact date changes each year), and school holidays of July/August.