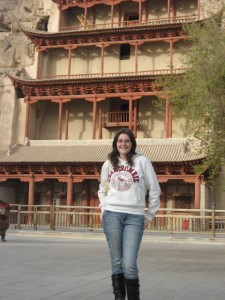 My Adventure in Gansu

Our July meeting speaker will be Lucy McCarthy. Christchurch has a sister city relationship with Gansu Province. Lucy says “In 2010 I was lucky enough to be chosen to represent Christchurch on a three month international program held by the Gansu Provincial Government. During that time we learnt about Chinese language and culture, and were also able to travel around Gansu Province.”

Lucy will talk about her time in Lanzhou during the programme, and also the travelling she did to Gannan and the Hexi Corridor. Come along and enjoy her very interesting talk and power point presentation of her experiences in Gansu Province.

As we all know, there’s nothing worse than going to a function and saying ―Hello ah ah ah…‖ Not knowing or forgetting names is awkward and embarrassing; we want to avoid that.

As from the July meeting, we will have a table at the door as you enter. On it will be name tag blanks. Can you please fill one out and wear it during the meeting, and then return it as you leave. Hopefully over time we’ll all become name-fluent! 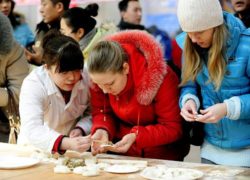 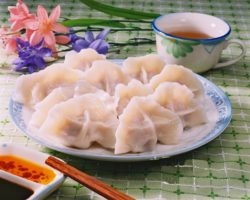 This is going to be great fun! We all love Chinese dumplings; now here’s the chance to learn how to make them! Each session only has room for 25 participants. We will have tickets for both sessions available for sale at our 28 July monthly branch meeting. With the ticket you will get a small map, giving details of how to find the location.

If you want to reserve your ticket earlier, contact Dave Adamson, 389 1376 or [email protected] Tickets are limited so don’t leave it too long to book! This is going to be a lot of fun and laughs – and you get to eat your handiwork!

The June 2011 issue of Voice of Friendship, the magazine of the Chinese People’s Association for Friendship with Foreign Countries (Youxie) has an article on their and the China-Oceania Friendship Association’s generous donation of 100,000 RMB towards Christchurch earthquake relief work. Added to donations we’ve received from several branches, this money has been of great encouragement and assistance in our time of need. 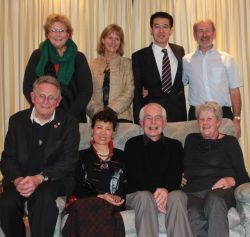 Chinese Consulate to be Established in Christchurch

As briefly mentioned at the June branch meeting, the Chinese Embassy is in the throes of setting up a consulate office in Christchurch; great news! No definite opening date has been set yet, but it looks as though it will not be until the end of the year; finding suitable premises is their challenge at the moment.

At the moment, the only staff here is Consul-General Madame Tan Xiutian, Vice Consul-General Mr. Wang Xinmin and Consul Mr. Hu Aimin. It sounds as though there could ultimately be about 12 staff. To welcome them to Christchurch, earlier this month Eric and Judy had a welcome banquet for them at their home. Madame Tan and her colleagues proved to be delightful; friendly, chatty and good English. It was a wonderful evening, and Madame Tan had the honour of cutting the pavlova, after she was told the story of the NZ vs Australia views on who invented it! As Mr Wang pointed out, China also has those stories! The meal was a great success and bodes very well for the future development of our relations with our Chinese friends.

About the Confucius Institute (CI)

Confucius Institute, a non-profit education network, devotes itself to satisfying the demands of people from different countries and regions in the world who learn the Chinese language, to enhancing understanding of the Chinese language and culture by these peoples, to strengthening educational and cultural exchange and cooperation between China and other countries, to deepening friendly relationships with other nations, to promoting the development of multi-culturalism, and to constructing a harmonious world. The headquarters of Confucius Institutes is in Beijing, under the Office of the Chinese Language Council International (Hanban).

The Confucius Institute at University of Canterbury is part of the global CI network jointly established by Hanban (Beijing), University of Canterbury (Christchurch) and Huazhong University of Science and Technology (Wuhan). It is officially launched on the 1st of November 2009 which was presented by Chinese vice Premier Li Keqiang. It is the second Confucius Institute established in New Zealand and the first on the south island of the country. It is, as the vice premier Li Keqiang noted, another achievement of cultural and educational exchanges between China and New Zealand. After six months of preparation and construction, on the 27th of May 2010, a well-designed and nicely-decorated CI premises is open to the public of the South Island.

The Confucius Institute at University of Canterbury aims to enhance communication, understanding and friendship between Chinese people and New Zealanders via Chinese language teaching, cultural study and economic exchange.

The Confucius Institute will serve as a learning centre, offering a variety of credit and non-credit courses and programs, and hosting various Chinese Proficiency tests, such as HSK (Chinese Proficiency Test), YCT (Young Learns Chinese Test) and BCT (Business Chinese Test); a resource base, providing all kinds of informative resources and consultative services; an exchange platform, facilitating cultural, academic and economic communications between China and New Zealand.