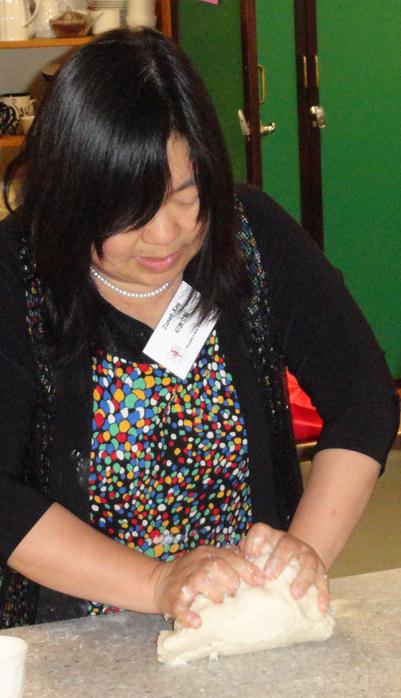 Hot pot is a Chinese style of cooking where a stock pot is in the middle of the table and various ingredients such as meats, vegetables and noodles 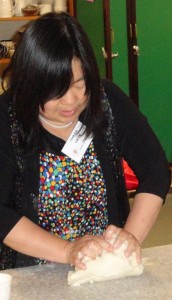 are put in to cook. There are many different regional styles, such as the very hot Sichuan, but we are going to experience Janet Kee’s southern style.

Do you put in the vegetables first? or everything all at once?  Each cook has their own style.

The cost is $15 per head, for the ingredients.

Hawke’s Bay were privileged to welcome Kim Hyunwoo and Kim Doyoung from Korea to our last meeting where we were delighted to be taught the basics of Weiqi Go by these two very knowledgeable young men. Kim Hyunwoo has won the Korean Championship twice and is a teaching professional and arrived in New Zealand in March with the aim of promoting this fascinating game.  Kim Doyoung emigrated to New Zealand when he was 13 and is currently NZ Weiqi Go champion.

The New Zealand Weiqi Go championship will be hosted by the Hawke’s Bay Go Club over the weekend of 28-29 September and John Chen plans a beginners’ tournament on the smaller 9 x 9 board.    For more information go to  www.go.org.nz

Dave Bromwich from Hawke’s Bay is our new National President

At the recent National Conference  AGM, Eric Livingstone retired after five years of effective and dedicated service and Dave was elected President. Dave says, ‘I look forward to working together collaboratively for a continuation of excellent activity in the coming year.’

Dave brings his experience and knowledge of China and commitment to NZCFS, as he takes up this challenge.

Already some articles have appeared in the media.  Click on the links for Simon Day’s article in the Sunday Star Times: http://www.stuff.co.nz/business/farming/dairy/8717483/Why-export-when-you-can-milk-it-abroad  and for Liam Dann’s NZ Herald article: http://www.nzherald.co.nz/liam-dann/news/article.cfm?a_id=106&objectid=10886319

Xi Jinping became President on 14 March 2013 at the 12th National People’s Congress.  He was Governor of Fujian between 1999 and 2002, then Governor and CPC chief  of neighbouring  Zhejiang  between 2002 and 2007.  He  was transferred to Shanghai as Party Secretary for a brief period in 2007 and was then promoted to the Central leadership in October 2007.

His wife, Peng Liyuan is a renowned Chinese contemporary folk singer and performing artist, and is changing the image of the Chinese first lady.

President Xi has called for a renewed campaign against corruption, continued market economic reforms, an open approach to governance, and a comprehensive national renewal under the phrase “Chinese Dream.”  The NZCFS website has links to Chinese newspapers.

‘Xi stresses safety for livelihoods, national harmony’,  NANJING, May 31 (Xinhua) — Chinese President Xi Jinping has urged a deepening of a national campaign to strengthen safety, which he described as a basic premise for people’s health as well as national development.

Praising the work of various political and law enforcement agencies in recent years, Xi called for more efforts to solve “deep-rooted” problems in a systematic, integrated, and lawful manner in order to ensure people’s livelihoods, social order and the country’s long-term stability.

‘China should accelerate the implementation of a functional zoning strategy’, said Xi, at a study session with members of the Political Bureau of the Communist Party of China (CPC) Central Committee. ‘The government should set and strictly observe an ecological “red line” which requires all regions to optimize, prioritize, restrict or prohibit their industrial development according to their defined nature’, he said.

‘The concept of the ecological “red line” should be firmly established’, Xi said, adding that more space should be provided for nature to restore itself. ‘The functional zoning strategy should be carried out to advance urbanization, agricultural development and ecological security in a scientific and balanced way’, he added.

The situation in Tibet continues to boil with recent self immolations of monks and nuns bringing the spotlight again on the region. Using a variety of original sources the author tells the story of Tibet in the modern era. Tsering Shakya was born in Lhasa and fled to India with his family. He later won a scholarship to study in Britain and is now a Professor in the Institute of Asian Research at the University of British Columbia in Vancouver, Canada.

The book’s hefty 450 pages follow the events from 1947 (when India became independent from Britain) in considerable detail, giving plenty of space to the actors and actions which helped to define the era in Tibet. The book spells out the complexity of events, the many different parties involved, and also the influence, albeit limited, of Britain, India, and the US.

The broad conclusion that rises from all the detail is that ultimately it is the story of a clash of two incompatible cultures and world views: Tibet’s traditional religious and social customs and the Chinese Communists’ two ideologies: nationalism and the unification of China; and communism, the progressive reform of a backward “feudal” society. In 1950 the PLA entered Tibet and China insisted on incorporating Tibet into the “motherland”. China had overwhelming military power, which it both used and threatened to use when necessary, to achieve its aims. In contrast, while it desired to maintain its independence, Tibet’s government was weak, divided, isolated internationally, and its military inadequate. Tibetans clearly did not regard themselves as part of China, but despite Chinese assurances, Tibetan autonomy was erased and their culture and religion were progressively devalued and controlled by the Chinese.

Some surprises emerge in the book, for instance the 1959 Tibetan ‘revolt’ started as a misunderstanding between the Tibetans and the Chinese. The Dalai Lama tried to resolve it but such was the mistrust, misunderstanding and Tibetan people’s fear and resentment at the Chinese, exacerbated by the harsh treatment of resistance in eastern Tibet, that events got out of hand. The Chinese on their part suffered from a number of false assumptions and refused to accept the slightest challenge to their power.

In the present day (1999 Ed.), little has changed. Communism has been replaced by an equally fervent belief in economic development, for which Tibet’s natural resources are valuable, but the nationalism and conspicuous imposition of military power continue. Chinese migrants have benefited most from the economic developments while Tibetans suffer lower levels of education, employment and opportunity. However, China considers the issue to be primarily one of preserving the ‘motherland’, not addressing Tibetan concerns.

In a 2012 interview the author notes that he doesn’t expect much change in China’s approach to Tibet despite a new leadership. The spate of self immolations, he suggests, result from the lack of proper channels in China for people to voice their grievances to the authorities without fear for their safety. This book provides a thorough description of the five decades of Tibetan history in which its society and culture have experienced huge change.

The Dragon in the Land of Snows is available from Hastings Public Library.

[Note: Matthew Griffiths is a long-time member of the New Zealand China Friendship Society. He loves Chinese food, has visited China many times, studied Mandarin, and attempted to learn Tai chi. He and his Chinese-born wife Deborah have two bilingual children and they lived in China from 2008 to 2010 and he still can’t get enough. Editor] 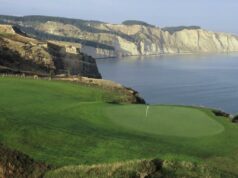 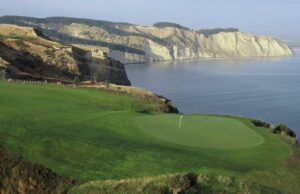