Annual General Meeting: The first meeting of the year always includes the branch’s Annual General Meeting. Please give some thought between now and then as to whether you would like to stand for the committee. This is an opportunity to become more involved in our society’s activities. We are all committed to the NZCFS; here’s your chance to give your talents to achieve the aims of our organisation. Nominations from the floor will be accepted on the night for the roles of President, Secretary, Membership Secretary, Treasurer, and members at large.

Yes, it’s that time of the year again, the banquet we always enjoy! Limited seating is available, so make sure you don’t miss out. PLEASE NOTE payment must be made at the time of making your booking. Details of the banquet and how to book are shown below. We are delighted to welcome Bernard Duncan as a new branch member. Bernard is chair of the Christchurch China Sister Cities committee. 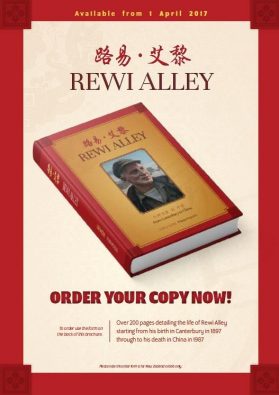 As reported in our December newsletter, with 2017 being the 120th anniversary of the birth of Rewi Alley, this is going to be a big year of commemoration activities. His sixty years’ work for the people of China has made him one of the most famous New Zealanders and one of the most revered foreigners in China. In 1997, to commemorate the centenary anniversary of his birth, his niece, Philippa Reynolds, wrote his biography. The book was an easy 96 page read, in English, and included fifty black and white photographs. 2017 is the 120th anniversary of his birth, the 90th anniversary of his going to China and the 30th anniversary of his death in Beijing. To commemorate these various anniversaries, the Christchurch China Sister Cities Committee, as the publisher of the book in 1997, plans to republish it. The updated edition will be in English and Mandarin. To maintain authenticity, it will be as the author wrote it, with the addition of many colour photographs. This exciting republication project is being handled by committee chair Bernard Duncan and society branch member Dave Adamson. This new book will allow New Zealanders and the people of China to learn of Rewi’s life and achievements, his philanthropy, his educational philosophy, his collection of cultural artefacts and his contribution to China-New Zealand relations. It is intended to have this book available in hard cover in April 2017, with a paperback version being available later in the year. Details of how to purchase the hard cover version will be finalised in the coming month, and advised at that time. In the meantime, here is an image of what this exciting book will be like. This book will become a 2017 Must Have!

The Future of Our Society

A few years ago the NZCFS commissioned a survey of its members to gain an understanding of where the society is going. As a continuation of that survey we have developed a follow up. It raises a few contentious issues, so can you please spare 15 minutes to go through it and let us know your thoughts. We are getting this out to our wider membership so we can get as many individual responses as possible.

The survey cuts off on the 1st of February 2017, so please be sure to take a few minutes to have your say on where you think the society should go, and what its focus should be in the future. If you have any questions regarding the survey, please call NZCFS National Secretary Simon Appleton on 0223969590 or (09) 216 2632. After the 1st of February Simon will pull together all the responses and using your feedback develop a strategic and action plan proposal.

Planning is progressing steadily for our conference this year! The earlybird registration will be $110 if paid by 30 April; after that it will be $140. The registration form and further details will be forwarded as they come to hand. With this being the 110th anniversary of the birth of this great man, this will be a very important conference, with a range of very interesting speakers; this is going to be a conference not to be missed! Culture Galore is a multicultural festival that celebrates our city’s diversity with food, arts and crafts, music and dance performances from more than 80 cultures who call Christchurch home. As well as colourful performances the entertainment and activities will also include face painting, bouncy castles, stone carving, police speed radar, storytelling, water walkers, pedalmania and more. Culture Galore has been running in the community since 2001 and has grown cumulatively each year and in 2016 over 6000 people attended the event. A huge range of fun activities for the whole family. A Message for Chinese Migrants

Charlotte Pfeiffer, together with Dr Ann Hutchison and Prof James Sun (both from the Uni Auckland Business School), is conducting a piece of business research on how immigrants experience work in New Zealand and how culture influences one’s personal job experiences. In particular, they are looking at the workplace experiences of immigrant workers from China as the Chinese community in New Zealand is especially fast-growing. Their long-term goal is to help NZ businesses to better support immigrant workers. They are currently searching for participants (Chinese working in NZ) to complete their survey. If this is you, Charlotte would be delighted to hear from you – and you will go in the draw for one of three $200 Westfield vouchers! You can contact Charlotte on [email protected] 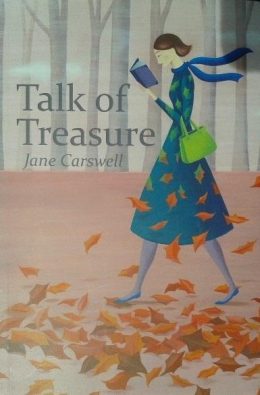 In her second book, also an autobiographical memoir Jane has explored her life for the reader through the vicissitudes of writing a book. “Treasure” is not inherited jewellery or investments in the bank but diaries kept through the years and reclaimed in essence to reward the reader with expanded anecdotes from the past. Comments of books read in childhood trigger wonderful memories of similar experiences with sheer delight. It is through the New Zealand China Friendship Society that a spare room becomes a guest room, and so begin the years of sharing food and friendship with ten Chinese students. Grace, from Lanzhou is of special memory as a delightfully ebullient girl who during a two year stay became well-loved by our Society members. Exploring the teaching of St Benedict and practising meditation have been part of the rich life that Jane has experienced while fretting about the difficulties of finding a publisher for her writing. She has a keen eye for detail, a delightful sense of the absurd while writing with great empathy for human frailty. This book is a worthy sequel to “Under the Huang Jiao Tree”. Jane Hole, a warmly valued member of the Christchurch branch of the New Zealand China Friendship Society writes under the family name Carswell.

Readers will remember the articles in the January and July 2016 newsletters about the proposed Kumara Chinese Miners Memorial Reserve. This moving poem was written by Bronwyn Wafer of Kumara about one of those early Chinese miners.

Brings memories of the past

Rushed to the Greenstone ‘Golden Well’

Toiling for treasures to get family at home by

Or rocking Gold cradle until the day’s end

While some others treated him so untoward

He never did any harm digging for gold

Today we have tailings, water races, pottery and more

To remind us of ‘Ah Chow’s’ hard chore

Remembrance with a Chinese garden of pride

Means ‘Ah Chow’ will always be by our side

Chinese New Year is one of the biggest events on the planet, and every year a sixth of the world’s population travels home to celebrate with their families. Based on the heart of Beijing, this eye-opening series offers a front seat view of one of the most spectacular events on earth. In each episode Jing Lusi, The Hairy Bikers, Kate Humble and Ant Anstead explore a different side to this celebration, from Beijing West train station where eight million passengers a day squeeze onto trains to take thousands of miles home, to Xinfadi food market where families, restaurants and businesses stock up for the all-important New Year Feast to Beijing’s stunning Temple of Earth, where thousands of families visit to pray for happiness and good luck amidst a cacophony of fireworks.

Lanterns, Chinese cultural performances, food, fireworks and more! This year the physical area the festival covers will be doubled for several reasons: last year was too crowded, there are more food vendors this time around (and possibly a second smaller stage) and a heap of huge and shiny new lanterns coming in, some of which make use of the lake.

Bring along your family and friends to experience Chinese culture through hundreds of vibrantly coloured lanterns, including some new to Christchurch and New Zealand. This event is for everyone in the city.

Drop-off zones will be located on Park Terrace and Harper Avenue.

Mobility parking will be available in the Botanic Gardens car park via the Armagh Street Bridge. A mobility pass must be visible.

Please note: the entrance will be left-turn only from 3pm.