It is with great sadness that we record the death of Jack Grant-Mackie, a friend of China and a stalwart of the Auckland Branch for more than 50 years. Jack and his wife Diana regularly hosted committee meetings at their Ponsonby home.

Jack was an Honorary Life Member and former President (1975-76) of the Geological Society of New Zealand \[GSNZ\].

Jack was a practising geologist and an active member and a passionate supporter of GSNZ from the late 1950s throughout his life. He was the third-longest standing member of the National Committee (14 years) and a founding member of the NZ Fossil Record File Sub-Committee (from 1967). He attended almost every GSNZ conference from 1967 to 2015.

Jack was a palaeontologist on the staff of the Geology Department, University of Auckland, 1958-1998, and a research associate in his retirement. He supervised untold numbers of graduate student theses, helped run numerous outside organisations, and was a major player in NZ paleontological research for five decades.

Jack was awarded a PhD in Geology from the University of Auckland and, subsequently, was appointed as a Professor of Geology at Auckland University. As a young member of the faculty, he joined a New Zealand Science delegation to Beijing in 1967 and met Chairman Mao.

Jack was proud to show his photo of their meeting when he and his granddaughter were guests of honour at our Auckland Branch dinner in Mount Eden last year.

Jack and his wife Diana represented the best traditions of the progressive intellectuals who supported the New Zealand China Friendship Society’s Objects during the years when it was not easy to be a friend of China. They both took cameo roles in our music video One Promise that Sylvia Yang co-wrote and produced for screening at the 2009 Lantern Festival.

We send our sincere condolences to Jack’s family. 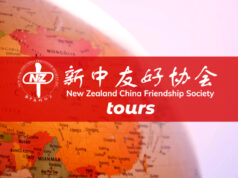