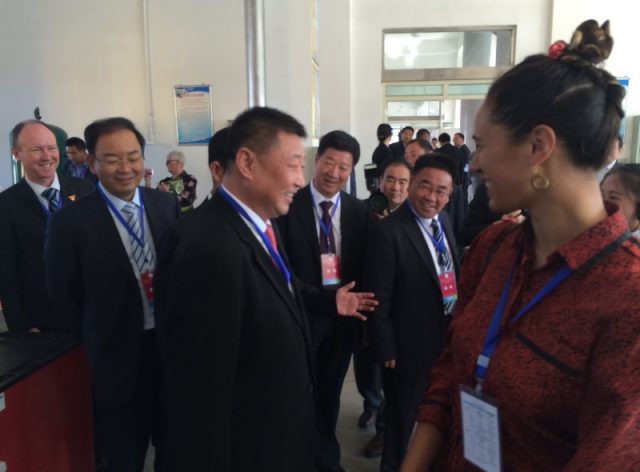 The following is the second report from Michelle Elia, ‘our’ latest teacher at Shandan Bailie School.

“I’ve been teaching here at SBS for about four months now and the same instant love I had for Shandan has blossomed. I have nothing negative to say about the wonderful place that I live in (except for perhaps riding on the back of a motorbike in any weather condition below 0°C!).  My students are great!  Initially, I was concerned that they did not understand what I was teaching them, but I gave each student in my classes a 30 minute test to complete and the marks were absolutely astounding!  So it’s a proud feeling all around.

“Social wise – I’ve made so many friends, joined the local gym, and I’ve been given a Chinese name  “Méiguī” (玫瑰) that translates to “Rose”.  My Mandarin is coming along nicely too, which I am really happy about. I think it helps to live in such a remote part of China when learning Mandarin.  I’m confident enough to the point where I can catch a taxi by myself, order food at a restaurant, and help my students out if they don’t understand my English! I’ve learnt so much about Buddhism, body imbalances (the Chinese are really big on health), old legends, and most importantly the history of Rewi Alley. I was fortunate enough to be a guest at the Old Silk Road International Forum in September. Helping out the local government with preparation for this significant event increased my knowledge on Rewi Alley and George Hogg and their importance in Chinese history.

“I was fortunate enough to be a guest at the the unveiling of the Rewi Alley statue at the new Bailie International Vocational College [This will be a provincial level institution in Shandan, that is expected to be up and running within two years. Click here for more information.]. Helping out the local government with preparation for this significant event increased my knowledge about Rewi Alley and George Hogg and their importance in Chinese history. I was honoured to meet many distinguished guests during this time, including Xi Yuanping, President Xi Jinping’s little brother, who commented on my bravery as a young New Zealand woman to come to West China to teach English for one year. I’ll always remember his comments for years to come. [See Editor’s note below]. The guests were able to visit the Rewi Alley and George Hogg Museum, the Memorial Tombs (to George Hogg and Rewi Alley), and their ongoing legacy that is Shandan Bailie School.

“The amazing thing I’ve found about living in Shandan is that I’m not at all homesick.  In November, last year (2015),  I went to Beijing for a week (and hung out with a lot of Kiwis!) and I realized how different Beijing is from Shandan… not in a bad way though! If I were to compare the two to New Zealand cities, I would say Shandan is the Foxton of China and Beijing is the Auckland of China!  The collective “family” feel that I experienced in my first week hasn’t changed and explains why I haven’t been very homesick. I must admit though, I could kill for some fish ‘n chips!

“All in all, I’m still very happy about my decision to come to SBS. Hopefully by the next report, my Mandarin will have improved a lot more.  Perhaps by my last report, I’ll be able to write it all in Chinese. It might have to be in Pinyin though!

See below for images of Michelle Elia’s life at Shandan:

Editor’s Note: Xi Yuanping is the young brother of President Xi Jinping, and both are sons of Xi Zhongxun.  Xi Zhongxun was an early honorary principal of Shandan Bailie School, and in his earlier years was also a young military officer in Shuangshipu, Shaanxi province, at the time when Rewi Alley established the first Bailie School there. However, he and Rewi did not meet until later.  Thus this is a very strong connection between SBS and top-level government that is much appreciated by the NZCFS.

SIX MONTHS IN SHANDAN! I made it! 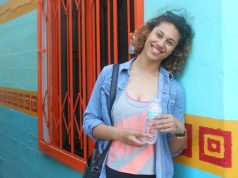