April speaker:  this is being finalised at the moment, and details of the speaker will be emailed to you soon.

Be sure to register for this great conference! With no travel or accommodation costs it’s the cheapest one you’ll ever attend! This conference will be a really special one – 2017 is the 120th anniversary of the birth of Rewi Alley, the 90th anniversary of his arrival in China and the 30th anniversary of his death. Let’s make this the biggest one ever!! Come along, enjoy yourself and support your society. Conference information is on the following pages.

The book on his life by his niece Philippa Reynolds, published in 1997 (now republished in Chinese as well as English, with many colour photos) will be on sale at a special Conference Only price; this book will be a Must Have!

Please bear in mind we may call soon for a number of branch volunteers to pick up on various tasks during the conference; many hands make light work!

Raffle:  We will have a raffle at the Saturday evening banquet, so if you have any goodies you would like to donate to use as prizes, please contact

Ailsa Dodge 376 4422 or [email protected]Zealand.  She will speak at our meeting about the Chinese Village in Ashburton. 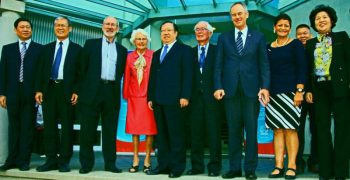 We recently had a very important delegation visit us from Hubei Province, headed by Governor Wang Xiaodong. There were approximately 100 members in the delegation, and they were in Christchurch for a little over one day. It may have been a brief visit, but a lot was fitted into a busy itinerary during that time.

Some nine agreements were signed after the conference, including the Memorandum of Understanding between the Rewi Alley 120th Anniversary Commemoration Committee in Canterbury. The MOU agreed:

I.     The two sides will carry out a series of activities of Rewi Alley 120th Anniversary Commemoration in 2017 in the fields of education, culture, youth exchanges, collection of cultural relics and exhibition both in Christchurch Region and Hubei Province.

II.   Further exchanges and cooperation shall be maintained between the two sides to inherit the Spirit of Rewi Alley.

III.Regular contacts shall be maintained between the leaders and relevant departments of the two sides to facilitate consultations on the exchanges and cooperation as well as matters of common concern.

After the signing of the agreements, the dignitaries went for lunch with Consul General Jin Zhijian. 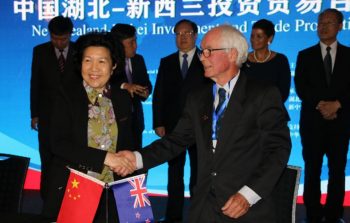 On Friday, the Mayor of Honghu City and two delegation members visited Hanmer Springs and Amberley where there was a formal meeting regarding the new relationship of Honghu City and Hurunui District, for which an agreement had been signed the previous evening. A powerpoint presentation of the earthquake damage in Hurunui was then shown, before going to a local restaurant.

Branch member Bernard Duncan met the mayor of Honghu, which was very useful as he and Dave Adamson will meet with him in Honghu later this month.

Governor Wang and his delegation had a day in Auckland on the way here, and flew home via Sydney. 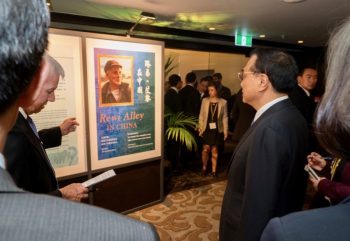 Yep Ng and Cr Leen Braam at the pig pit oven at the site of the historical Chinatown on the outskirts of Ashburton.

Those of us at our March meeting enjoyed a very interesting talk by Ashburton Mayor Donna Favel on the history of early Chinese settlers in Ashburton. Councillors Thelma Bell and Selwyn Price were with her. It was intriguing the way the talk went, because as Donna explained the project, branch members were able to give her and her councillors many tips and contacts which will help them with this challenging project.

A few days later I heard a very full news item on Radio New Zealand on the project. Ailsa Dodge heard it as well, sent me the link, I contacted the journalist (turns out I used to work with her!), and the outcome is I’m sure you will be interested to read about a project our branch may become involved with. So then, read on:

Ashburton’s derelict Chinatown, once the largest communal Chinese settlement in the South Island, could be getting a new lease of life.

The Chinese community in the South Canterbury town was established 100 years ago, when eight men emigrated from the Taishan district in China.

Over the years the site on the outskirts of Ashburton grew to become a thriving community of about 90 people, which included shops and a communal cooking area.

The buildings were now in a state of disrepair but the council and residents planned to change that.

Yep Ng’s father was one of the original eight Chinese immigrants who came to the Ashburton site, along with his four brothers and three cousins.

He said by the 1950s the area included a fruit shop, commercial laundry, rice storerooms, market gardens, and a school room.

“This used to be a Chinese school. I was here for a short while, until one of our teachers moved, learning a bit of Chinese.”

Mr Ng said it was the largest communal Chinese settlement in the South Island.

“Every Sunday we had a community dinner. The money came from gambling money, and the winner had to put in some money for the dinner. That’s how it works.”

One of the best preserved elements of the site was a traditional pig pit oven which was brick lined and had a pulley system to lower a pig into it.

In 2014, the oven was restored and it was now the only functional Chinese pig pit oven in Australasia.

Six years ago the surviving family members arranged for the site to be managed by the Ashburton Council to preserve its future.

Councillor Leen Braam said it was still developing plans for the site, but it had formed a working party to get the project going.

“My idea – it’s only my idea, but I think the council thinks the same – is that it would be really nice as a park, with some of the buildings restored and maintained.

“I can see a square out here with Chinese elms and walkways coming out from it, connecting to the next sub-division. So it would be part of a bike and walk area through Ashburton.”

Mr Braam said the council did not want to create anything too elaborate, because it would be expensive to maintain, but it did want to honour the important role Chinese immigrants had played in the area for the past century.