Dave Bromwich reports, “Last week the fourteen people on our Tour met the  Shaanxi Women’s Federation and visited the Society’s health and co–operative development projects in Feng County, Baoji City. One day we thought we would have to double back, but the road was open and snow was falling and we saw a wolf as we passed by!  This week we are in Lhasa enjoying a very different culture with lots of time to spend exploring the Bakhor market and other sights near the hotel.”

Father of the Chinese Republic – Sun Yat-sen or…..??

On October 10th, China celebrated the 100th anniversary of the Xinhai revolution, which swept aside the Qing dynasty and resulted in the foundation of the Chinese Republic.  Teri France, Secretary of the Hibiscus Coast Branch, has written a very interesting article for our Website and states that:

‘It’s extraordinary what one finds out in conversation with one’s friends.  We have been playing badminton for some years with a Chinese friend from Hong Kong and over coffee, a few weeks ago, the subject of Sun Yat-sen and the revolution came up.  Then, without saying a word, he drew out of his pocket an ageing photo and began to describe his family’s connection with Sun Yat-Sen and his great uncle, Yang Quyun or Yeung Küwan as he signed himself.  This is how the story unfolded…….’

What’s in the news in Beijing?

Dave Feickert says that the press in Beijing is constantly reporting on the financial issues of Europe and the ‘Occupy Wall Street’ movement in the US , with blow by blow accounts from Brussels/Frankfurt/Berlin/Paris and Washington and frequent TV updates.

The Wellington Branch of the NZ Chinese Language Association organizes a monthly Chinese feature film (with English sub-titles) held in Committee Room One of the Wellington City Council, generally on the fourth Thursday of each month at 7 pm. Go to Wellington Branch on our website to get the details of the next film to show.  The following DVDs are recommended.

The film is the biographic story of Li Shutong, a celebrity in modern Chinese culture.  Born to a rich family in Tianjin in 1880, Li Shutong changed his dramatic life to become a great monk of the time, Master Hongyi. 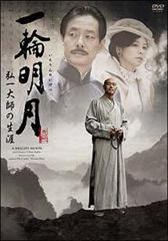 A Bright Moon, draws a sharp contrast between his earlier life as a wealthy prodigy of the arts, including calligraphy, painting, music, sculpture, and drama, and his later life as a highly venerated itinerant monk steeped in the school of precepts and morality. The transition from ebullience, fame, and accolades to solitude and serenity is phenomenal to say the least.  This film is set against the back-drop of major historic events in China up to his death in 1942.

The sumptuous period epic Forever Enthralled dramatizes the life of Mei Lanfang,  widely regarded as one of the most legendary opera performers in all of Chinese history. Though a male, Lanfang built his reputation on the basis of outstanding performances as female characters, and in fact, lived out his private life buckling under the weight of repressed emotions.

The film made its international premiere at the 2009 Berlin International Film Festival, where it received positive responses, with critics calling it a “sumptuous” film. The Hollywood Reporter  describes the film as “traditional but elegantly mounted,” with “superb” art direction, and states “from splendidly lit interiors to authentic costumes and accessories, it evokes the theatre culture and literati scene of 1930s Beijing”.