The Year of the Rooster has been a busy one indeed for the New Zealand China relationship.  The marking of several significant Rewi Alley anniversaries (his birth, arrival in China, and eventual passing in Beijing) have been cause for multiple celebrations, gatherings, talks, exhibitions and other events.  Wellington has truly been the place to be, with many members of the Wellington Branch having had the opportunity to attend these events at the Embassy of the People’s Republic of China, Parliament, and Connolly Hall.

This month, Wellington has played host to the NZ China Mayoral Forum as well as the 45th Anniversary Symposium, where speakers examined the past, present and future of the bilateral relationship.

With so much jam packed into people’s calendars at this time of year, we know you can’t possibly make it along to everything on offer.  So this month’s newsletter is dedicated to some of the highlights of the last couple of months.

As you know, our next Branch meeting will not occur until 21 March 2018.  If you can though, please do come along to our Chinese New Year Banquet on 11 February ( details below).

In the meantime, have a safe and happy summer and we look forward to seeing you all in the new year.
Nathalie Harrington

SUBSCRIPTIONS for 2018 membership are due. The registration form also includes a membership renewal form if you are not able to attend the banquet but still wish to renew your society membership.
Electronic Banking is available for payment. Details are provided on the registration form. When making an electronic payment, please ensure your name is specified as part of the payment details. 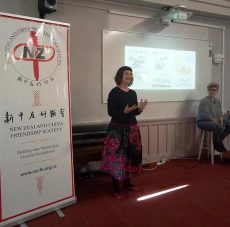 What might a dragon and a taniwha have in common? As respective symbols of Chinese and New Zealand culture, looking at what these creatures embody and represent can give us insight into these two cultures and their values.

For the final Wellington Branch meeting for 2017, Lisa Terreni and Rachel Denee, both academics and professionals in the field of early childhood education, came to discuss a project they have been conducting which looks at how this conversation might be encouraged in schools.

Run in tandem between a class at a Wellington preschool and another in Beijing, the project involved using storytelling, creative activities, and inquiry-based learning to get children to discuss what a taniwha was to them. This was later followed up with a similar discussion on Chinese dragons. Teachers worked with the stories and the children in different ways, reflecting the different cultural and pedagogical contexts.

As a further exercise in cross-cultural communication, the two classes, on opposite sides of the world, were also in contact over video chat, comparing their experiences and sharing their thoughts with each other. 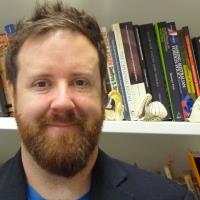 Dr. Stephen Noakes, professor of Politics and International Relations at the University of Auckland, delivered a talk discussing the content of his latest book, The Advocacy Trap, in which he examines the work of various transnational advocacy groups in China.

Rather than considering the book to be a China-specific critique of transnational activism, Noakes instead uses China as a case study to examine the dynamics at play. The activist movements he chose to discuss included Tibetan independence, the abolition of capital punishment, attitudes to HIV, emissions-trading, intellectual property rights, and Falun Gong.

Transnational advocacy groups act as carriers of norms which can impact states’ behaviour, socialising them within the international community. In looking at the various success stories and failures, Noakes observes that there is also a capacity for influence to extend in the opposite direction, allowing for the states to influence the activists. The takeaway from this, Noakes summarised, is that it is time to reassess the agency of these activist networks, and their efficacy in state politics.

Hosting panel discussions nationwide, Korero aims to highlight the global issues of the 21st Century surrounding civic and cultural engagement, and the promotion of social integration and harmony. Its young panelists are from diverse backgrounds and experiences, encouraging creative problem solving and dynamic discussion.

The main topic that was discussed was language as the key to cross-cultural understanding and community – specifically, whether learning a second language in schools should be compulsory, and the implications that that would have on the inherent connections between language, culture, and identity.

All but one speaker believed that learning a second language should be compulsory in schools. The majority believed that it would lend greatly to cross-cultural acceptance and understanding, not to mention the individual’s open-mindedness and mental agility. However, the one speaker who objected also highlighted the possibility that forcing students to learn a second language might actually drive them away from it. 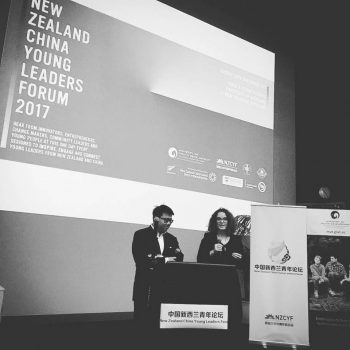 The New Zealand China Young Leader’s Forum was a one day event held to provide an opportunity for young entrepreneurs, and up-and-coming innovators to build connections and learn about motivation and leadership. Hosted by our very own Nathalie Harrington, the event drew the attention of people not only from all over New Zealand, but all over China as well. Numerous speakers gathered at the University of Auckland to share their thoughts and experiences on living or working in the Middle Kingdom. The event began with a discussion on the Belt and Road Initiative, and was described as “the practical implementation of the China dream” by Stephen Noakes, a Chinese politics lecturer from the University of Auckland. The talk highlighted the position of New Zealand within the Belt and Road Initiative in that our strengths lie within the realm of soft infrastructure such as cultural, economic, and social contributions towards this initiative.

Attendees had the opportunity to choose between four afternoon breakout sessions. Each session featured a panel of four guests who shared their experiences in China through either creating a business, studying abroad, or adjusting to a Chinese workplace, all from a New Zealander’s perspective. One such panellist was Jessica Rowe from Newshub, who spoke about her time in Beijing working for China Central Television (CCTV) as a daily bulletins writer. She described her time living with a Chinese host family and her endeavours towards mastering the Chinese language as an incredibly fulfilling and enlightening experience, and would do it again in a heartbeat. This one day event did exactly what it set out to do, which was inspire, educate and connect like-minded people.                                                                                 Words by Tabitha Wilson

A THANK YOU FROM VICTORIA UNIVERSITY OF WELLINGTON

We at the Wellington Branch of the NZCFS were humbled to receive the following letter from Victoria University last month, thanking the Society for its contribution to the University’s Scholars’ Studio:

Dear Luke and everyone at the New Zealand China Friendship Society,

On the 28th November, the world celebrates International Thanking Day. As part of this, Victoria University of Wellington are taking the time to get in touch with all our donors to say thank you so much for your support – we are really grateful.

As we come to the end of 2017, we want to thank the New Zealand China Friendship Society for your generous support. From medical breakthroughs to student successes, the generosity of donors like you have made these wonderful stories possible.

Please take the time to watch our thanking video which highlights how thankful our students are to be able to study at Victoria and receive a world class education, thanks to donors like you.

Wishing you Seasons Greetings and we very much look forward to seeing you in the New Year.
Best wishes from the Victoria University of Wellington Development Office team. 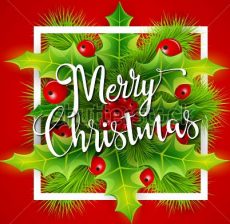 Wellington branch committee wishes members
a Happy Christmas and a Safe and Healthy 2018.


Our next newsletter will be published in March 2018.