Greetings to everyone:
This year’s AGM was another very joyful meeting to attend, although Brenda always referred to it as ‘the boring part’. Her review of last year’s activities revealed another good year. We had several excellent talks during the year, and I successfully ‘procrastinate’ two good topics relating to China into four meetings ╮(╯▽╰)╭. I also received a lot of positive feedback related to our newsletter. I will seek some improvements this year. Afterwards, Waitsu put a very inspiring idea of ‘merging’ some of our meeting with some local Chinese residents’ events. This received support from most of us and I would also say that would achieve a lot while we work towards this. Unfortunately, Brenda and Norma decided to only carry on their position in our society for one more year! They strongly suggest us to think about going forward into our next year’s AGM and consider taking on the responsibility. Oh, John Bond is going to be 101 this month, and he is still very confident in driving! Best wishes to him!

You probably noticed in the first paragraph there is a strange syntax showing a person shake his shoulder. This is a type of emoji that is popular in Asian countries and can show some different things that classical Android or iPhone could not express otherwise, such as this ᕙ༼ຈلﻝ͜ ຈ༽ᕗ I’m the power or (O_o)?? (Pardon me?) or  (╯‵□′)╯︵┻━┻ (I am flicking the table!!!). This is currently the most commonly shared cultural phenomenon among the young generation, especially in China. For example, today (4th May) is the first day of work/school after the Chinese Labour Day holiday (1-3 May). And I would ask my friends in China that “(｡•ˇ‸ˇ•｡) Holiday finished for you？_(:з」∠)_” Or “(:3[▓▓] Wake up, time to get out of bed!” It is fun and one emoji could mean a lot. Many of us are addicted to this and do not ‘say’ things in a normal way anymore. Although you might say this is not the type of thing that the young generation should be addicted to, but technology changes our life, and the same with the culture.

The news of this month includes two things. The big one is that North Korea seems to have made their decision not to intensify the US with their long range missile. While at the mean time South Korea’s general election is likely to introduce a mild gentleman into their throne. Hope the current Korean peninsula situation will not go too extreme in the future.

While the small one is a very funny story. Last week a Beijing Weibo account (Weibo is pretty much a combination of Twitter and Facebook) posted out a photo, showing an air filter truck was treating and releasing fresh air in a park, and less 10 meter away from the truck is an air quality monitor station. The post mentioned that “It seems our dear administration has found the ultimate solution of solving air quality problem”. While at the same day, PM 2.5 index in Beijing reached 699. At the same time, pollen index is at warning level, PM10 index 803, and there was also a sand storm warning (see attached picture). There is a joke saying that “In Beijing, previously we had pollen in March, Dust in April, Sand in May and acid rain in June, this year we had them all within in a week.”

Nevertheless, air quality issue has existed in China for a long period of time, and this is not the first time that I have mentioned it as well. I heard that in some heavily polluted regions, confirmation of lung and breathing pipe cancer rate has risen by more than twenty times and the average age of first-time-cancer-diagnosis is also younger.

At this months meeting I will not only finish my story about Beijing at the International Youth Forum, but also present the factors that contribute to this tremendous trouble that is harming millions of people every single day.

The meeting time and place is:
DATE: SUNDAY 28 May
TIME: 12:30 P.M.
VENUE: ROTORUA ARTS VILLAGE, 1240 Hinemaru Street
We will enjoy, as usual, our shared lunch before my talk, and don’t forgot to subscribe for this year’s membership. Member’s fee is the same as last year, $15 per person or $25 per family.

SMITHS BOOK
In chapter nine, Smith mentioned that he experienced some phenomena that other foreign people who was living in China in the nineteenth century experienced that which reflected the ‘flexible inflexibility’, or ‘outwardly is, inwardly is not’. That means his servant often disobeyed his commend about doing things in a certain way and insisted on doing it their own way. But when he warned this servant, he was very compliant and apologised for his mistake. When it happened next time, however, he still did it again in his old way. This coincided with another famous quote that pretty much every Chinese parent have used many times: “This is for your own good!” I would guess that Smith’s servant thought he was not a local, and he did not know how easy, or how easily he could achieve his target without compromising too much, while he did not get the point. So, he would do it in his way ‘for his own good’.

I might be wrong, but this is a reflection of a typical Chinese way of thinking. Unlike with western cultures, the boundary of person to person emotionally is relatively blurred. This phenomenon is extremely common within relatives. For a long period of my childhood and even nowadays, my mother, and grandmother, often command me, or force me to wear another layer of clothing, eat more fruit, don’t go hunting, and be active in meeting young lady etc. Why? ‘This is for your own good! Who would not care if it were not your mother/grandmother?” I know the same thing happens in Kiwi families as well. I would say that how I and thousands of other younger generations, are dealing with it could all be called as ‘outwardly is, but inwardly is not’. I would personally say this is not a unique characteristic that only Chinese hold.

From this newsletter, I am going to add another little section about some funny, or genius translation between English and Chinese as the last funny piece. Some are from my personal experience, and others are from internet or what I heard from others.

This photo was taken by me while travelling around Xinjiang province. There are several funny points on the picture. There is a ‘Journey West to Culture Gallery’ in the middle, but what it actually wants to talk about is ‘a Gallery demonstrating the Journey to the West (西游记) book.” Seems the editor of this info board did not know that Journey to the West is a proper title of that book, which is one of the four most famous novels in China. On top of the photo, it showed that “there is a statue of prince magic fan”. I am pretty sure no one would have a clue what’s that talking about. Because 铁扇公主 should be translated as Princess of Iron Fan, not magic fan, This person is also a character in the book “Journey to the West.” She is famous for using a big palm-leaf fan which is made of iron. I don’t think this book has been translated into English though.
Have a good day and see you at our May meeting!
Tony 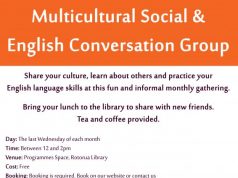