“The Misconceptions of the Difficulties in Trading with China”

New Zealand born and educated, Stuart Ferguson has spent the past 36 years in a wide variety of roles in the transportation sector. Prior to that he was involved in the Educational and International Editions area of the book industry.

In the mid 1970’s he was a senior part of a team that introduced alternate ocean delivery systems to and from North America (vessel operating) and Europe/Middle Eastern (Trans Siberian Railway connections) cities which paved the way for truly independent and non aligned shipping services to flourish in this region.

He was since 1988 the lead in establishing and developing the services offered in this part of the world by COSCO, the Chinese National ocean carrier. Stuart stepped down as CEO two years ago and will relinquish all but an arm’s length Directorship from April this year.

He has lived in the United Kingdom, the USA, and China and travelled widely both on business and pleasure. He has visited China on more than 70 occasions and been the Leader of numerous trade delegations sponsored by the New Zealand China Trade Association (NZCTA).

Stuart has since 1991 been elected to 7 terms of 2 years each to date as Chairman of NZCTA and during that time hosted a number of Chinese leading politicians, Zhu Rong Ji, Wu Yi and Bo Xi Lai included.

He is married with 2 adult sons and lives in Auckland and increasingly in Greytown where he is restoring a 160-year-old heritage home. 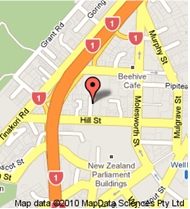 An optional Chinese buffet meal, supplied by the Fujiyama Café, will follow the meeting at 7 pm. Orders for the $10.00 meal (please pay at the door) will be taken up till 6 pm. If you think you may be arriving late, please let the Secretary know in advance.

Last month it was our great honour to receive His Excellency Mr Michel Legras, the French Ambassador to NZ. Mr Legras spoke at length of his personal experience in China, as well as his perspective as a French National and diplomat.

In 1964 France renewed diplomatic relations with China, one year later China accepted French students to study within its borders. In 1966, China stopped welcoming French students, just as Mr Legras was enrolling in Chinese Language and Civilisation studies at the University of Paris.

Fortunately in 1969 he had an opportunity to work as an interpreter for the French Embassy in Mongolia. His first impression was that China was “Very disturbing, but very beautiful”, particularly taking note of the colossal public works, and the colours: “Dark blue clothing, grey buildings and bright yellow characters on red paper.” This was the beginning of a 44-year relationship with China poetically summed up thusly: “When you love someone [as Mr Legras loves China] you don’t see their deficiencies, you see them globally, as a whole”.

“Trade, politics and religion have always been central to relations between China and the West” there has also been a “history of misunderstanding between these cultures.” Mr Legras used examples from the Opium wars, the Vietnam war, the Cold war and the recent financial crisis, and spoke of “Cycles of admiration and detestation” as Chinese and Western cultures have struggled with massive change and ever evolving international relations over the last thousand years.

Following his presentation Mr Legras was kind enough to open the floor to questions; these largely fell into three categories, summarized below:

Chinese products are now looked on as Japanese products were before: cheap, mass produced and of low quality. This will improve however, largely due to internal pressures. Beijing has decided to emphasize the training of scientists; this will lead to great innovation, but also to a large pool of people who demand a higher salary and better standard of living. The rich in China want more technical and luxury goods, this will drive improvement in the goods China produces.

China has long stated that it has no intention of military expansion. There are enough people and problems within the country to keep the government occupied, and this is also the reason for the large standing army. It is also important to note that in cultural terms, being a soldier is not an ideal or particularly well-respected occupation. Most importantly, military expansion is not on the agenda because China has a good knowledge of history; influence is far more important to them than military power. 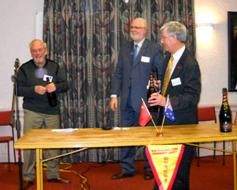 Some people in the EU worry about the movement of industry to China, some Chinese people feel that they saved the West from economic melt-down and had not been properly repaid. “There needs to be a frank and open dialogue between all parties, not focusing on difficulties and differences, a need to come together.”

Chinese language learning in France started in the late 17th century, and is currently taught in Grammar schools; however, there is a lot of competition between Chinese immigrants and French who learned Mandarin for jobs. Learning a language alone is not enough.

“French people see China as an ancient civilization with rich culture, respect it as such, and are rightly impressed by it.”

Thanks to the French embassy for providing several bottles of fine champagne, the subject of lucky draws at the end of the presentation. It was a most enjoyable evening shared by 90 members and guests.

February 13, Sunday, 6.30 pm Chinese New Year Dinner at Dragons Restaurant in the Year of the Rabbit.

Open to all ages, all levels. One to one or small groups. Two sessions in October:

Chinese opera is an integral part of Chinese natural culture. This programme provides a comprehensive introduction to the basic features of China’s theatrical arts.

2. A Primer of Peking Opera 京剧启蒙 – DVD 50 minutes in English

In 2010, a Chinese city on the banks of the Huangpu River embraces the cities of the world. Shanghai Expo, built around the theme “Better City, Better Life” offers a window from Shanghai into China, from China into the world, and from today into the future.

‘Experience Shanghai, Embrace The World’ Exhibition will bring you over 60 charming photos to reveal Expo’s success and Shanghai’s beauty and prosperity.

Three tables of Wellington branch members took part in the joint celebration of the 61st Anniversary of the founding of the People’s Republic of China, with four Wellington Chinese associations. It was full house at the Grand Century Restaurant on Sunday 26 September. Guests at the banquet included the Chinese Ambassador Xu Jianguo and his wife Mme Ni Li, and Mayor Kerry Prendergast and her husband Rex Nicholls. Amongst the Karaoke singers were Mme Ni and our own Derek Taylor.

Residents in Beijing are under renewed pressure to learn English as part of an official drive to make the Chinese capital into a “world city”.

A recently relaunched government programme, which started in 2002 in preparation for the Beijing Olympics, calls for all preschools in the city to introduce English courses within five years.

According to local press reports, a minimum of 60% of shop assistants, receptionists and hairdressers under 40 will also be required to pass English tests by 2015, as will 80% of police officers.

Every civil servant under the age of 40 with a bachelor’s degree will also be required to master a minimum of 1,000 English sentences. (from “The Guardian Weekly”)

Members of the Branch Committee were delighted to host a banquet on Sunday 5 September, for a Sichuan Friendship Delegation of six, led by Ms Zeng Qinghua (centre), Vice Chair of the Sichuan Provincial People’s Political Consultative Conference. Sichuan, a large rice-growing province on the Yangtze River, has a population of 88 million and the capital Chengdu (5.4 million) is a key city for the whole of western China.

With sadness we will say farewell next meeting to Yanhang Wang of the Cultural Section at the Embassy, who is returning to China, at the end of her assignment, on November 1.

Yanhang came to her post here at the Embassy two years ago from the National Library of China in Beijing. There she was Team Leader of the “Foreign Books and Periodicals Section”. She will resume her responsibilities at the Library when back in Beijing.

While with us in Wellington, Yanhang has been enthusiastic and focussed, and a wonderful supporter of the Branch. She leaves with our very best wishes for a happy and successful future.

Wellington members, Bryan and Robin Halliday and Derek Taylor, will be leaving on 9 October for the tour led by Dave Bromwich. We wish them a happy trip.

CHINA: HOW MUCH TO INNOVATE? – by Branch Member George Mills

The government of the People’s Republic of China believes that “novel-product” innovation is key to securing long-term economic growth, and thereby wishes to increase China’s innovative capacity through central planning. Two US academics from the Georgia Institute of Technology suggest, however, that Beijing’s drive to “boost China’s innovative capacity” is based on false pretences. Dan Breznitz and Michael Murphree argue, in their book Run of the Red Queen: Government, Innovation, Globalization, and Economic Growth in China (Yale, 2010), that China’s ability to achieve sustainable economic growth and continuous job creation, lies not in China’s need to become a novel-product innovator, but rather to continue excelling in what they term as “second-generation, process and production” innovation. By this they explain, China’s strength lies much more in the development of technologies, and less so in the research behind such technologies.

In fact, what makes China such a powerful and central player in the production cycle of the most advanced technologies the world has seen are Chinese companies’ “formidable competitive capacity to innovate in different segments of the research, development and production chain”. The authors argue that such novel-product stars as “Apple”, “HP” and “Cisco” need China as much as China needs them (as Chinese companies make the large majority of their products), and as such what exists between China and such foreign multinationals is a “true interdependency”, something the authors suggest is a healthy arrangement for the global economy. The authors do touch on a related, interesting issue. While they accept that in the current arrangement, the foreign multinationals keep a larger percentage of the profits of novel-product technologies, they point out that China keeps a much larger share of the jobs the manufacturing of these products creates, which is in keeping with the PRC government’s job creation goals.

Whether one agrees or disagrees with Breznitz & Murphree, their forthcoming book raises at least two points worth considering. On the one, (objective) hand, their argument likely makes good economic and policy sense, if one looks at the numbers only, and by that I mean the numbers for economic growth and job creation. On the other, (subjective) hand, however, “novel-product” innovation is also an issue of national pride and national accomplishment, and one suspects that China (or at least its government) will not be satisfied until the country has truly home grown future “Apples” of its own, irrespective of the sound economic and social benefits of current arrangements between China’s technology companies and those from abroad.

Non-Fiction: “Pictures for Use and Pleasure: Vernacular Painting in High Qing China”, by James Cahill, University of California Press, 2010.

This groundbreaking book about works appreciated by the “non-elite” during the 17th and 18th centuries expands the field of Chinese pictorial history.

This is the story of Yoshiko Yamaguchi, a young actress born in Japanese-occupied Manchuria in the 1930s. The complex tale threads between wartime Shanghai, post-war Tokyo and the Middle East.