Hubei province is in central China.  Honghu, where Rewi helped with flood relief when he lived in Shanghai, lies on the southern border with Hunan,  on the Yangtze River, which flows through Wuhan.  Honghu is about 120km SW of Wuhan. 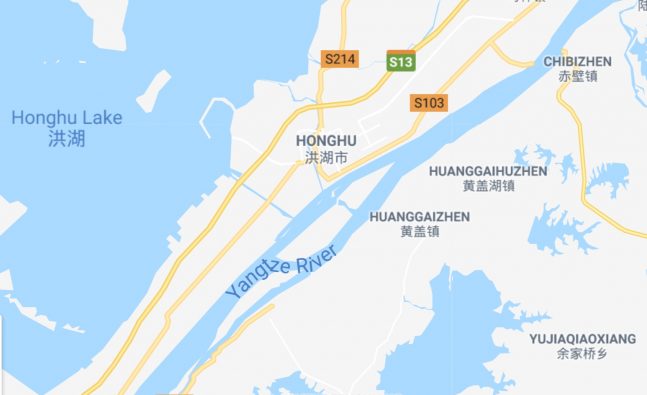 Honghu city in Hubei Province is where Rewi Alley helped with flood protection measures in the 1930s.

The name “Honghu” translates to “Flood Lake” (“hong” = flood, “hu” = lake). Its name reflects its nature, because the Yangtze overflows into this region, flooding the area and forming the lake.
Honghu Lake is the seventh largest lake in China; it has many functions including flood buffering, fish and vegetation production, water-quality monitoring, public education, and tourism. The main types of agriculture in this region are rice paddies and fish ponds. One of the major plants grown is the lotus plant. Almost every part of the lotus plant is eaten here, including the stem, root, and leaves.
The Yangtze River dyke [American: dike] – on which Rewi alley’s former residence is located, is on the south side of Honghu lake – it’s main function is to artificially regulate the water level in the lake.

Wuhan is the closest city to Honghu [120km].  Honghu is actually part of Jingzhou city, but it is closer both in distance and transport links to Wuhan.

Honghu does not have a train station: it can be reached only by road – buses depart from the WuChang Hongji Bus Station, adjacent to Wuhan South Railway Station/Wuchang Railway Station.  Wuhan has a number of train stations, which are all linked by metro.
The bus trip takes about 3 hours, and costs 50-65 RMB (2016).

The Rewi Alley monuments, and hotels, are within walking distance of the bus station.

Honghu is not a common destination for tourists, so not all hotels will accept foreigners.  One which does is:  Honghu Xindu Business Hotel, No.37, West Xintiyanhe Rd, Xindi, Phone: +867162288666.

Current weather can be viewed on http://www.accuweather.com/en/cn/

The Wuhan area is one of the ‘three furnaces of China’.  So if you come in summer it will be hot and humid.

As in all of China, it is preferable to avoid the peak holiday periods of Golden Week (1-7th October), Spring Festival/Chinese New Year (10days in January or February, exact date changes each year), and school holidays of July/August.  If you are travelling at these times, you’ll need to book transport in advance, and possibly be flexible with your dates to get to the places you want.