Nelson received an invitation from the Huangshi Municipal Committee to attend the opening of the Garden and Mineral Expo on 26th September 2016. 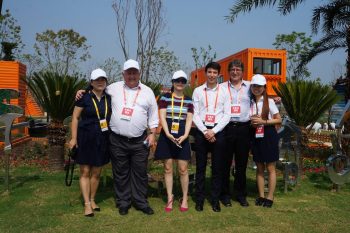 Due to the local body elections, there was just a small delegation headed by Bill Findlater, Nelson Tasman Tourism executive advisor, who represented the Nelson mayor, Rachel Reese. Other delegates were Ferry van Mansum, president of the Nelson Branch of the New Zealand China Friendship Society (NZCFS), the organisation that looks after the sister-city relationship, and Jordan Lankshear, a Nelson Youth Councillor.

At the last Sister Cities New Zealand conference in Nelson, the NZCFS’s Nelson Branch won the Air New Zealand Award for the “Best Youth Education or School Project” thanks to the work of Immediate Past President Christine Ward. It was decided to use the prize of ‘air travel with Air New Zealand to the value of $1500′ to involve younger people. This resulted in Jordan Lankshear’s introduction to China.

There were about 600 local and international guests to celebrate this showcase of the wider Huangshi area. In the 63 ha park are 40 gardens representing the districts, businesses, educational institutes and indeed also the sister cities. The gardens range from classical Chinese to very modern, which all looked very impressive. And then to realise that only last year November the whole area was just mud!

When the gardens age, they will develop a lot of character and this park will a be a feature for the city in years to come. We are already looking forward to visiting the park again in a few years time.

The second part of the Garden and Mineral Expo finds its origin in the 3,000 year old copper mining that made Huangshi, meaning “yellow stone”, the birthplace of Chinese bronze culture. An enormous complex has been developed to house the exhibition and sales departments of every kind of mineral and even dinosaurs are displayed.

Always impressive is the way these days are run. From the moment the plane lands you are looked after and welcomed by people like Zhou Xianwang, chairman of the Huangshi Municipal People’s Congress, Dong Weimin, the mayor of Huangshi, and other dignitaries. You are treated to banquets and housed in the best hotel. This made us really appreciate the bond between the two cities and, especially for Jordan, this highlighted the future between the two cities and showed him why younger Nelsonians should contribute to the sister-city ideal.

For Bill and Ferry the most important part is always to reconnect as often as possible with old friends and make new ones because to know each other is to respect one another. The final conclusion is certainly that this was a short but highly successful trip for everyone involved.