Ko te taura whiri, he whiri i te tangata
The muka (flax fibre) cord is like the cord that connects people.

The formal welcome of the kahu huruhuru, or Māori feather cloak, gifted to Chairman Mao Zedong on behalf of King Korokī, on temporary loan to Te Papa from the National Museum of China (NMC) collection, Beijing, was a very significant and moving occasion.

The day marked a circular journey of nearly 56 years since the cloak’s presentation to Chairman Mao by Ramai Hayward during the NZCFS tour, at the top of Tiananmen building on the evening of National Day 1st October, 1957.  The pivotal role of the New Zealand China Friendship Society in this historic gifting and the Society’s present day partnership with Te Papa, acknowledged by Te Papa CEO Michael Houlihan in his words of welcome, demonstrates the principle of Mana Taonga – acknowledging the connection that communities have to taonga, or cultural treasures, and Te Papa’s role in supporting these links.

The cloak loan and handover ceremony held at the National Museum of China (NMC) on the 11th April was a hugely important acknowledgement of the role of the cloak as a symbol of goodwill and friendship between Aotearoa New Zealand and China. The event was attended by dignitaries including Chinese Vice Premier Mme Liu Yandong and New Zealand Prime Minister Rt. Hon John Key.

The powhiri at Te Papa ceremonially completed the cloak’s physical and spiritual journey back from China and was important to all those that made this opportunity possible. It was a time for celebration with the Tainui Waikato people, whom King Koroki and the Kingitanga lineage descend, who are the resident iwi (tribe) at Te Papa.

The group welcomed onto the marae with the cloak included NZCFS members, National President Eric Livingstone and Hon Patron Mr Simon Deng; Mr Chen Yu and Mr Tan Tian from the NMC; Charge d’Affairs Mr Cheng Lei and representatives from the Embassy of the People’s Republic of China; Mr John McKinnon, NZ ambassador to China from 2001-2004 responsible for rediscovering the cloak in the NMC, now representing Asia NZ Foundation. 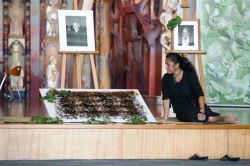 Dignitaries in the welcoming group on the marae included Wellington Mayor Celia Wade-Brown. As the kaikaranga elder women from Tainui called the visitors onto the marae, the cloak was carried and placed on the mahau (stage), on a finely woven whariki or floor mat that was woven by master weavers of Tainui descent, Matekino Lawless and her daughter Tina Wirihana. Both were present at the powhiri, another example of the close genealogical ties that permeate on such occasions.
Photos of King Koroki and his daughter, the late Dame Te Atairangikaahu, the Maori Queen, were displayed, joining the cloak in spirit with them.

The formal speeches in Maori were opened by Tainui elder Taki Turner.  Arapata Hakiwai, (Head of Matauranga and Maori Collections) at Te Papa, spoke on behalf of the visitors. Taku Parai of one of the local Wellington regional tribes, Ngati Toa Rangatira, also spoke. After prayers by Taki Turner the floor was open for non-Maori speakers to proceed.  Speeches by Te Papa Kaihautu Rhonda Paku and Te Papa CEO Michael Houlihan were followed by honoured guest Mr Chen translated by Mr Tan of the NMC.  Mr Chen reiterated the importance of the Te Papa/NMC relationship, in particular that the staff exchanges continue.

Eric Livingstone, President of the NZCFS, responded with his acknowledgements and gave an insightful précis of the early involvement of the Society’s ambassadors: Ron Mason, Ramai and Rudall Hayward, Dorothy Mason and Irene Young. Songs accompanied each of the speakers. The delightful rendition of Jasmine Flower, a Chinese song, led by the NZCFS members, was well received.

After the speeches, the hariru and hongi (shaking hands and pressing of noses) completed the rituals of encounter on the marae, and the visitors became one with the hosts. The final part of the process was the sharing of refreshments to nullify the tapu ‘sacredness’ of the event, which was held in the Icons venue of Te Papa.

Seeing the feathers ruffle in the breeze as the cloak was carried onto the marae was a poignant moment. Each feather and woollen strand transitioning the ancestral values of mana (authority), manaakitanga (care) and kaitiakitanga (custodianship). The cloak has life. It has alighted and returned, albeit briefly, to carry a message. It has a new role as a cultural ambassador between our two countries. The cloak is a metaphor for connectivity, cross cultural understanding, transition into the future and potentiality. Chairman Mao’s words ring true – “The smallest is as great as the largest.”  A small but beautiful cloak carries a great message of hope and peace.