Our first meeting of 2015 was our AGM on 12 April.  All office bearers agreed to be reappointed.  It has been a pleasure to work with such a willing team some of whom have given very long service to our Branch.  However, it is imperative that we get some new people with their fresh ideas on our committee.  Please give serious thought as to who these new people might be.  Branch membership remains steady at 25.

Following the AGM, Annie Ren, Timaru’s first Mandarin Language Assistant showed pictures of her homeland and made enlightening comments about the differences she noticed here compared to China.

Our next meeting on 17 May at Margaret and Derek Hughes’s home was a well-attended social occasion where we thanked Annie for the great work she had done breaking new ground in Timaru and wished her well for her return home.  In spite of the challenges she faced as the first MLA in Timaru she enjoyed her time here and continues to keep in touch.  Alyssa Du remained as an MLA but also returned home later in the year.  Sunny Shan was appointed to the Confucius Institute at Aoraki Polytechnic (rebranded CPIT/Aoraki and more recently Ara Institute) and has been active promoting Chinese Language and Culture in South Canterbury.  The Foleys continued their practice of giving hospitality to these visitors at their farm near Waimate.  Thanks Diane and Brian. Also to Ann White for keeping in touch with the Chinese visitors.

Four members of our branch (Ann White, Margaret Hunter and Margaret and Derek Hughes)  attended the NZCFS National Conference in Nelson in May.  The programme was interesting and well organised. After the Conference we assisted with transporting two delegates from China with transport from Christchurch to Dunedin with a brief stop in Timaru in between. Thanks to Ann and Richard White for providing accommodation.

Our next meeting on 30 September followed the successful format of a Chinese meal at the Red Cross Rooms followed by a speaker.  Mrs Blue Kerr from Fairlie gave an interesting illustrated talk of her experience in Nepal on a house building project with Habitat for Humanity.

Ron and Dianne Paulin spoke at a meeting on 8 November which had 25 people attending.  One of our best attendances in recent times.  Their illustrated talk and comment about their first experience of China was received with interest.

The highlight of our year would have to be the visit of a six person delegation from the Shanghai Branch, 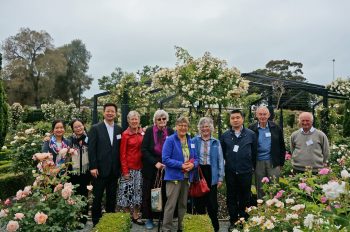 Peoples’ Association for Friendship with Foreign Countries.  After considerable anxiety during the planning it all came together on the day.  On arrival we walked our visitors around the Trevor Griffith’s Rose Garden on Caroline Bay followed by a catered lunch at Richard and Ann White’s home at Levels.  Then we visited the Confucius Institute and the visit concluded with afternoon tea in the Timaru District Council Chambers.  In the absence of the mayor, Councillor Tony Brien gave a very warm welcome to the delegation.  This was much appreciated.  On their return to China the Delegation sent a letter of appreciation and stated that their visit to Timaru was the highlight of their time in NZ.  Maybe the opportunity to visit a small town was a new experience for them?  The visit was also a new experience for our Branch and we are grateful to National Executive for fitting Timaru into the Delegation’s busy schedule.

We welcomed the Year of the Monkey with our usual Banquet at the Golden Palace Restaurant.  The attendance of about 50 was a little down on previous years, never-the-less a very enjoyable occasion. South Island Vice-president Dave Adamson attended with his wife Carol.  Dave spoke to the gathering about the He Ming Quin (Kathleen Hall) Nursing Scholarships which the Society sponsors.  Our Branch continued its generous support of the Scholarship with a donation of $700 this year.

Ann White is stepping down as Chair of the Society’s Tour Committee at the National Conference AGM in Tauranga in May but will continue as Tours Coordinator until 1 December 2016, after many years organising the Society’s China Tours – a very demanding job to do on a voluntary basis. She is leading a tour to China in October.  Husband Richard also assists our Branch by reviewing our Financial Statements.

Our Committee gave thought to nominating a person for the Society’s Prominent Persons and Leaders Tour to China.  An approach was made to an interested person who eventually decided not to accept the nomination.

In conclusion, many thanks to all who have supported our Branch this year by attending meetings or assisting on our committee.  Please read my comments in the first paragraph of my report again.  It would be great to have some new people on our committee to ensure our Branch has a prosperous future.

May the “Year of the Monkey” be a good one for you.